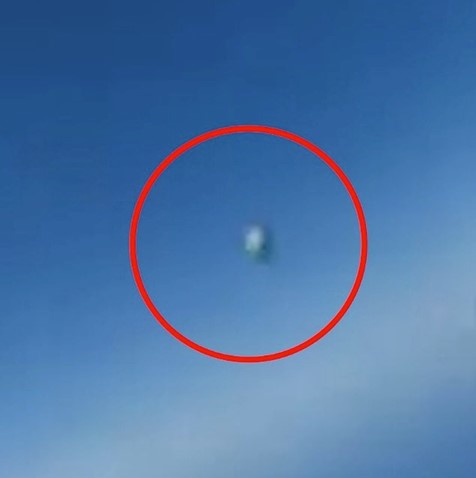 DailyMail.com obtained an exclusive image of a metallic-looking orb flying over an Iraqi city, caught on video by a US spy plane.

The image, captured in April 2016 by an intelligence-reconnaissance plane, was included in a classified briefing video on UFOs shown to multiple US government agencies.

The briefing video describes it as a ‘short clip of an unidentified flying orb that appears to have a metallic shine on its surface’, and shows the strange object flying over the city of Mosul in northern Iraq with the background of the shot showing the streets below.

It is the first publicly revealed image from the US government’s ongoing UFOinvestigation showing an unidentified craft over a conflict zone.

A UFO flying around where the US military is operating has sparked security and safety concerns at the Department of Defense, with military officials worried it could endanger pilots and ground troops.

Although the image itself is not classified, footage from which the image was captured was part of a classified briefing produced by the Pentagon’s Unidentified Aerial Phenomena Task Force (UAPTF), a unit tasked with investigating UFO incidents, which has now been replaced by another office in the Department of Defense.

It was obtained by journalists Jeremy Corbell and George Knapp, who have released the image on their new UFO podcast, ‘Weaponized‘.

The briefing describes and shows the UFO as moving from south to north, adding that it does not appear to descend.

In a four-second video titled ‘Mosul Orb’ included in the briefing, the UFO appears for one second as it flies alongside the MC-12 spy plane.

Intriguingly, the object appears to have no apparent flight surfaces like wings, or discernible propulsion.

An intelligence source with operational knowledge of the footage said it was filmed using ‘FMV [full motion video] by DGS-1’ – implying that the plane sensors captured infra-red and other data when it filmed the UFO.

DailyMail.com understands that officials who assembled the briefing video believe the ‘orb’ was under intelligent control.

One intelligence source said the video was sent to the Joint Base Langley-Eustis in Virginia, where imagery and electronic signals intelligence experts studied it for United States Central Command (CENTCOM).

Despite being analyzed and studied by intelligence experts for over six years, the incident remains unexplained.

DailyMail.com can now reveal that the case formed part of the Office of the Director of National Intelligence (ODNI) Preliminary Assessment on UFOs, a report published in May 2021 which analyzed 144 cases and found an explanation for just one.

Read More: Metallic-looking orb is seen flying over Iraqi city of Mosul in 2016