Almost everyday in the news is another reported case of sudden, unexpected cardiac death. The vaccination status is carefully concealed in the report and any mention of past SARS-CoV-2 immunization appears to be scrubbed from the internet. Families maintain an airtight silence on a simple medical query—did they take a COVID-19 vaccine? Yes or No?

Prior to COVID-19 vaccination, the usual causes of death were almost always known antemortem, and were roughly 40% cardiovascular, 40% cancer, and 20% other causes. Chaves and colleagues have shown these proportions have been dramatically shifted to sudden cardiac death. 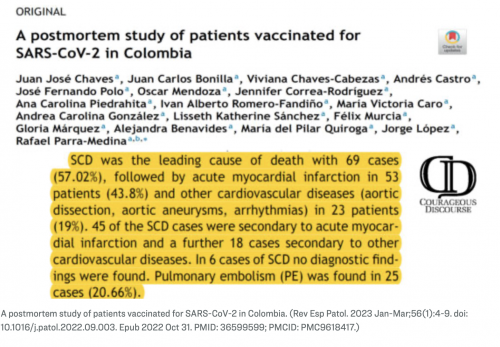 In a series of 121 deaths primarily after the whole virus CoronaVac (Sinovac) injection, 57% were classified as sudden cardiac death and the pathologies included myocardial infarction, aortic dissection, and in few cases with no cardiac pathology assumed primary arrhythmic death. Pulmonary embolism, another accepted complication comprised 21% of the cases. Despite the authors claim of “no association,” its my interpretation of the data that 78% of the deaths could be directly attributed to a known mechanism of COVID-19 vaccination. This is very consistent with the recent report from Schwab et al from Germany whose data revealed 71% of deaths within 20 days of vaccination occurred in the context of acute problems known to be caused by the vaccines.

When autopsies done by separate teams in different countries arrive at similar findings, we have external consistency. This is one of many criteria that are used in determining scientific validity. The assertion that COVID-19 vaccines are causing death is increasingly supported in the peer-reviewed literature.