A nurse friend who did not want to hear when I first questioned Covid jab safety two years ago is now furious about having been bludgeoned by the NHS into having three shots. She survived the first two but had massive bleeding after the third. Looking more deeply into the data, she found to her horror that the ‘safe and effective’ claim is completely unfounded.

I suspect there are hundreds of thousands of other healthcare workers feeling the same sense of betrayal, and that this is contributing in a major way to the current staffing crisis.

My friend’s experience is exactly in line with new figures from Australia showing a dramatic dose-response relationship between the number of jabs and the risk of having to go into hospital with Covid or dying from it.

The New South Wales (NSW) data, for the two weeks ending December 31st, are a rarity in that they include vaccination status. 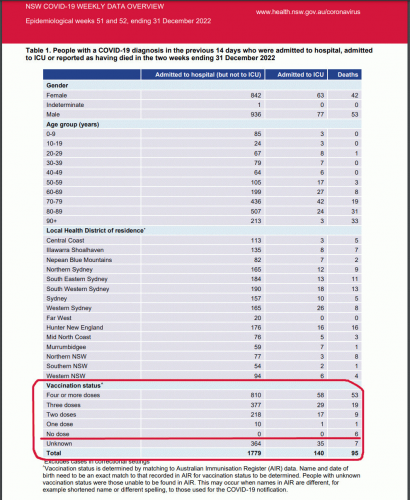 Out of 1,415 hospitalised patients where this status was known, 10 had received a single dose, 218 two doses, 377 three doses and 810 four doses. There were zero hospital admissions for Covid among the unvaccinated, who comprise 13% of the NSW population.

Deaths followed a similar pattern except that six unvaccinated people were reported as having died of Covid. None were in hospital, raising the possibility that their diagnosis was assumed rather than confirmed.

Businessman and mathematician Igor Chudov, reporting here on the NSW findings, acknowledges that the figures will be skewed by differences in how many people have had the different number of shots. After adjusting for those differences, however, he finds that the four-times-jabbed have a four times increased risk of hospitalisation compared with those who had two shots.