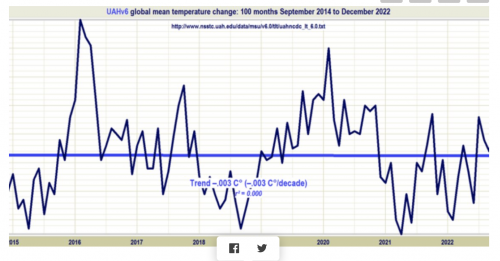 The U.K. may have had its warmest year on record in 2022 (at least, according to the Met Office’s frequently adjusted data), but globally the temperature has remained flat now for 100 months, since 2014. Christopher Monckton writes about the inconvenient data in Watts Up With That?

The cold weather on both sides of the Atlantic last month seems to have had its effect on temperature, which fell sharply compared with November, lengthening the New Pause to eight years four months, as measured by the satellites designed, built and operated by Dr. Roy Spencer and Dr. John Christy at the University of Alabama in Huntsville.

The graph shows the least-squares linear-regression trend on the monthly global mean lower-troposphere anomalies. The least-squares method was recommended by Professor Jones of the University of East Anglia as a reasonable method of showing the trend on stochastic temperature data.

Recall that the Pause graph does not constitute a prediction: it simply reports the longest period, working back from the present, during which the temperature trend is not positive.

As always, here is the full 45-year UAH dataset from December 1978 to December 2022, showing a far from dramatic global warming trend equivalent to just 0.134°C per decade: