A COVID-19 vaccine that has an adverse effect on the heart could lead to millions of sudden deaths if it were to be widely distributed and administered to a significant portion of the population. This is because the heart is a vital organ that plays a crucial role in maintaining the proper functioning of the body.

Unfortunately, at least two Covid-19 vaccines, produced by Pfizer and Moderna, that do have an adverse effect on the heart, have now been administered to millions of people numerous times, and this is most likely why the world has recorded millions of excess deaths ever since they were rolled out.

The Organisation for Economic Co-Operation and Development (OECD) is an intergovernmental organisation with 38 member countries founded in 1961 to stimulate economic progress and world trade. And for some reason, they host a wealth of data on excess deaths. You can find that data for yourself here.

The following chart reveals what we found in terms of excess deaths across the ‘Five Eyes’; which is an intelligence alliance comprising of Australia, Canada, New Zealand, the United Kingdom, and the United States, and a further 27 countries across Europe. 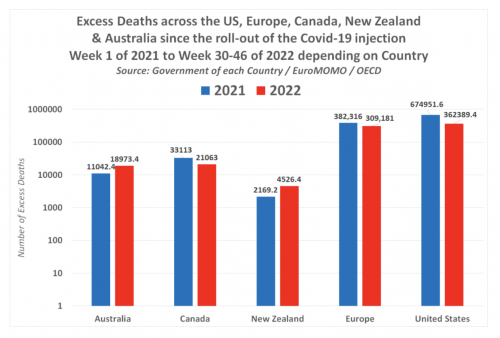 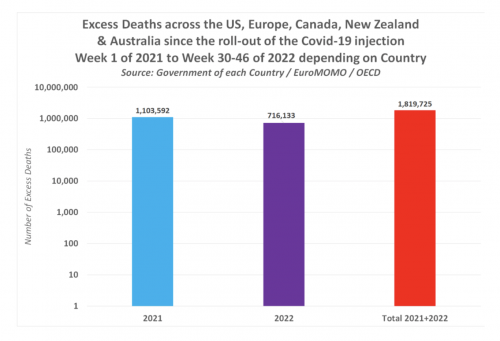 Unfortunately, official reports published by the Governments of the USA, Canada, Australia, New Zealand, the UK & most of Europe, confirm 1.8 million excess deaths have been recorded since the mass roll-out of the Covid-19 injections.

The same data found on the OECD site also reveals the United States is facing a devastating loss of life among its children and young adults.

According to official figures from the Centers for Disease Control (CDC), nearly half a million have lost their lives since the Food and Drug Administration (FDA) granted emergency use authorization for a COVID-19 vaccine.