The body advising the UK Government on climate change has said that 62 per cent of emissions reductions must come from “behaviour change and individual choices”.

In other words, the government must train people to use less energy.  Net Zero will not be reached by using renewables. It’s going to be achieved by reducing our living standards. And that’s the plan.

On 12 October, the House of Lords Environment and Climate Change Committee (“CCC”) published a report entitled ‘In our hands: behaviour change for climate and environmental goals’.  In their opening summary, the committee makes it clear every government department will be required to use psychology as a weapon against the public to ensure we behave in line with what the climate alarmists demand.

On 3 November, the House of Lords held a debate on ‘Climate Change: Behaviour Change’.  Lord Browne of Ladyton raised the topic: “To ask His Majesty’s Government, further to the advice that they have received from the Climate Change Committee that 62 per cent of emissions reductions involve some form of human behaviour change, what plans they have to introduce a comprehensive behaviour change strategy.”

This is according to a proposed addition to the draft report after the draft had been “considered” by CCC.  There were three amendments proposed, the second was to insert a sentence in paragraph 6: 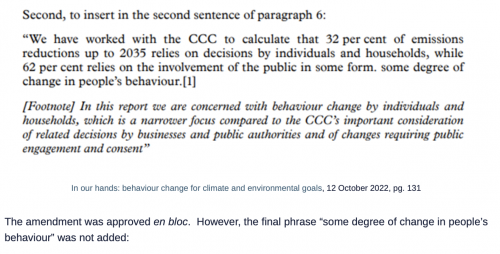 The amendment was approved en bloc.  However, the final phrase “some degree of change in people’s behaviour” was not added:

Read More: House of Lords pretend to debate behaviour change strategy that will be used to further climate change agenda