A bungling GP surgery has accidentally sent a mass text to hundreds of patients informing them they have ‘aggressive lung cancer’ instead of wishing them a Merry Christmas.

The text message, sent on December 23, issued the bogus diagnosis to patients at Askern Medical Centre in Doncaster – including some who were genuinely waiting for lung cancer test results, the Sun reports.

Property developer Chris Reed, 57, reportedly received the text message after being tested for lung cancer – causing his partner to burst into tears.

Mr Reed attempted to phone the surgery but found the phone lines full, before rushing to the centre to then be informed it was a mistake and his cancer results were, in fact, negative. 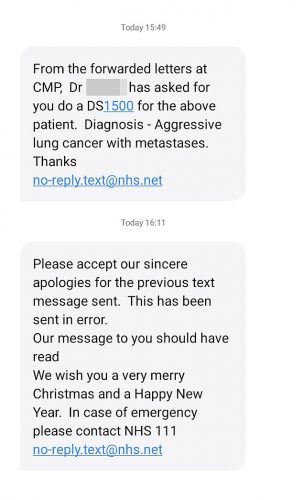 The text message, posted on social media by multiple upset patients, read: ‘From the forwarded letters at CMP, Dr [name] has asked for you to do a DS1500 for the above patient.

Metastases is a term used when cancer has spread from one site to another, making it more difficult to treat.

DS1500 is a type of form used so that people with terminal illnesses can claim benefits.

The message appeared to be meant for internal circulation amongst surgery staff only, but sparked outrage amongst local residents with many saying they were left shaken and worried by the message.

The surgery issued a second text message 22 minutes after, offering ‘sincere apologies’ for the error.

It added: ‘Our message to you should have read: We wish you a very merry Christmas and a Happy New Year.’

One patient at the surgery, who rushed inside after receiving the text, posted the error on Facebook, writing: ‘Something [is] clearly not right at Askern Medical Practice. Fuming.

‘I received this message and I’m not the only one. I was shaking and close to tears.

‘Quite a few in the surgery now with the same text. I was near the surgery and walked in to say what the hell?