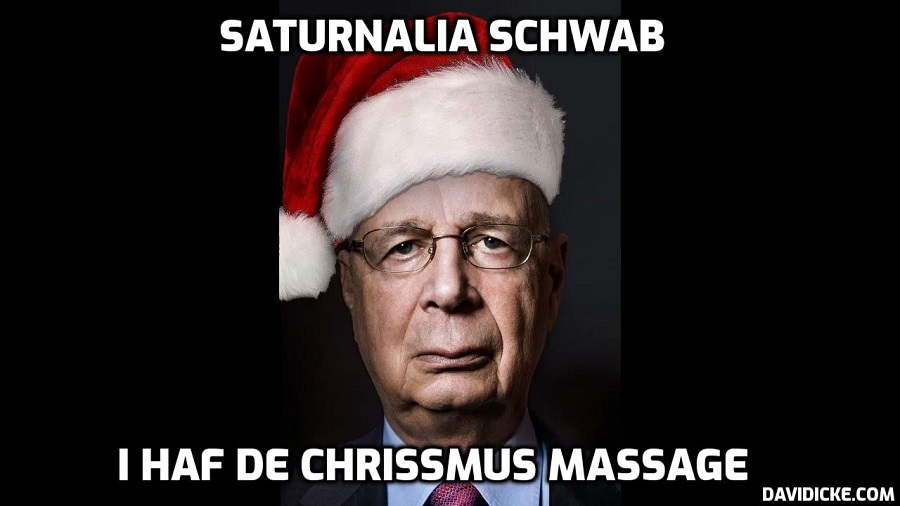 Written for him by Vernon Coleman

I had a dream (as someone once said) and in it I somehow obtained a copy of Sir Klaus Schwab’s Christmas Message to the comrades at the World Economic Forum.

You can now read what I dreamt that he said.

In my dream, Sir Klaus, who was, of course, knighted by Queen Elizabeth, (presumably for his services to conspiracy and oppression) has in Liz’s unavoidable absence this year, decided to make the traditional Christmas message himself and intends the speech to be seen on close circuit by members of the WEF and the Bilderbergers.

I have now decided that the speech I dreamt he might give is worthy of a larger, more enlightened audience. So here is my version of Sir Klaus’s Christmas Message. And who knows – maybe my version will turn out to be just like the real thing.

‘Those of you vatching on your television screens will be standing at the attention now I am expecting. There is no sitting while I am with the talking. Put down your puddings and listen very carefully to what I have to be saying. That includes you, Rothschild! Ha ha. You may be fat and rich but I am fatter and I haf more cow bells than you are haffing. I haf more cowbells than any of you.’

‘I must do zee talking because if vee let zat Charles King fellow do the speech he vil Vitter on about climactic changes and zee problems he is having mit his spare son the Duchess of somewhere or udder. Why this one is a gingernut and so strange I am not quite having understanding but zees things happen in England where your royal blood is sometimes a little curdled. The World Economic Forum is too important for zeese riff raffle things und vee cannot be any of that haffing, zo I do the Christmas speeching myself. You vill like it very much and no one vill at me the eggs be throwing. I speak to you alls in Englishen because I am in all zee languages quite perfect. Ja! Sehr gute ja? You vil stand to attention ven you are listening to me. Ja!.’

‘You must be listen to me because I have the world’s largest collection of cow bells from Switzerland in the whole vide vorld. Zis makes me very most important person. And I am also having the biggest amount of stocknagels. Soon I will have the biggest of everything. I will own everything and I will be happy. And I have a bigger stamp collection than the idiot with the spare son is having. Zo you must be listening to me, ja! And you vill be standing up while you listen. If you do not be standing up when you listen then you do not the words properly digest. Instead of going down, down into the bowel where we have our brains, the words float about and do not go down properly. This has been proven by clever mathematical modelling at the Imperial Mint in London city. They make a big model with used matchsticks and prove this thing.’

‘So! Vee haf had a vonderful jahr and vee cannot allow an Englisch idiot to how they say `cock it all up’. Ha. You see meine freunde I am so good I speak even the cloaked Englisch.’

‘And vot eine jahr it has been, not? Ja, ja. Das is good. And be standing up straight. I am called Sir because I was begiven this title by your Queen Elizabeth. She is big fan of mine.’

‘It has been very good jahrs. With the help of our freunden at the Imperial Mint we persuaded the fools that there was a dangerous disease that was going to kill them. It was just the flu but with the help of Dr Fauci, Dr Whitty, Dr Frankenstein and Madge Hancock, the idiots believed it was going to kill them all. We bought all the journalists. So cheap they are to buy. The BBC was the cheapest to buy; just scum. They are all communists there we told them to be good comrades and gave them a big bag of cheap caviar and let them sing Russian anthem. Then we made all the idiot peoples everywhere in the world lock themselves in their squalid little homes and not speak to each other. We made them watch Fauci and Whitty on their televisions every night. And they watched. Can you imagine!’

‘We made the idiots so frightened they begged for a test which did not work but which killed some of them. Ha Ha! And we made them wear stupid masks so that they look like bandits. And they are so pathetic they did these things without the questions asking. They make themselves masks out of old curtains. The masks will kill them with the pneumonia and the cancer but they wear them because we haf made them so afraid they just do what they are told to do. Ha. What fools the world is of consisting. And when we allowed them out of their stupid little houses we told them to buy their stupid little bits of food with our plastic cards; money which we control. Ha. They deserve to die and so they will because then they allowed the doctors to jab them with our poison that we had made. The poison we gave was good value. Bullets and bombs are so expensive. The drug industry is better value for this than the arms peoples. The idiots rolled up their sleeves and begged to be given the jabs. One, two, three, four and then another one because we told them the flu – which had mysteriously disappeared – was coming back for them like the bogeyman . Unbelievable that they believe this. The old flu – she disappears completely and then suddenly she comes back together with the new flu! So then there are two flus. How can people be so stupid, eh? The ones who got the old flu we gave drugs which did not work and which killed some of them. Old flu, new flu – who knows which flu is which flu, eh? We are clever, eh? And they are stupid peoples.’

‘Vee succeeded in buying all the stupid doctors in zee whole world by giving them very big money. We give them money for every person they poison but they do not do this jabbing themselves, of course. They tell their nursey nurses to do the jabbing with the deadly jabby poison which we make for them specially. When they have their money counted then they go the golf course. Ha ha. They think they are being rich but they are not rich like I am. And the stupid nurses then jab, jab, jab all the day long until their arms are sore. Now the nurses want more money for having given all these jabbings and getting the sore arms. ‘Oh pity me,’ they say, ‘the doctors got rich but did not do the jabbing. We did the jabbing but did not get rich!’ The doctors got rich and so they say nothing and the patients die and say nothing because they are dead. They drop down with the strokes and the heart attacks. The doctors say this is a new unexplained falling down dying disease and it is a coincidence that it happens after the jabbing. The doctors do not care what they do if we give them money. Ha! The idiots who have been jabbed have ‘mrna’ in their bodies. They do not know that ‘mrna’ stands for My Really Nasty Affliction. Ha. They beg us to kill them with the magic jabs. We give them toxic jabs and they thank us! Honours and prizes and applauses and much of money. They die and their relatives thank us for trying to save them. They are so wonderfully stupid, ja?‘

‘And vee haf succeeded in making Comrade Sunak the President of the United Kingdom! Comrade Sunak is one of us. A very rich man from his frau. We got zee bankers to get rid of the Truss woman. She was dangerous because she did not know which side of the bread has the butter. Comrade Sunak and his little friend have put up all the taxes to make the idiot people poorer. The ordinary people will own nothing because with the inflation and the interest rates on the ceilings they will own not even their little ticky tacky houses and they will be happy. Remember I told them this before and they did not believe me. Now perhaps they are believing me, ja?’