A Christmas carol rewritten to be more “inclusive” to women and “queer” people has prompted a row within the Church of England, after critics said the move was an attempt to “push political ideology”. The Telegraph has the story.

The traditional 17th century carol God Rest Ye Merry, Gentlemen features lyrics about Jesus’s birth and the joy of the shepherds and Mary.

However, at a carol service on Monday, an alternate version of the lyrics was printed in the order of service to feature “new inclusive words for a traditional hymn”.

All Saints with Holy Trinity in Loughborough used the carol with updated lyrics that removed reference to Christ as saviour and to Satan, instead referring to “queer and questioning” and “women, who by men have been erased”.

A parishioner and Church of England ordinand tweeted a picture of the order of service for the Mayor’s Community Carol Service with the updated lyrics.

Some of the new lyrics read: “God rest you also, women, who by men have been erased, Through history ignored and scorned, defiled and displaced; Remember that your stories too, are held within God’s grace.

“God rest you, queer and questioning, your anxious hearts be still, Believe that you are deeply known and part of God’s good will For all to live as one in peace; the global dream fulfilled.” 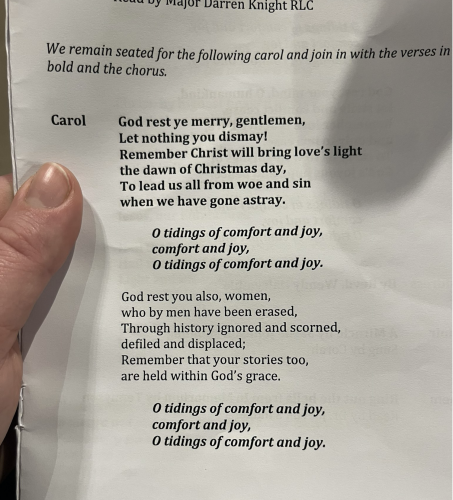