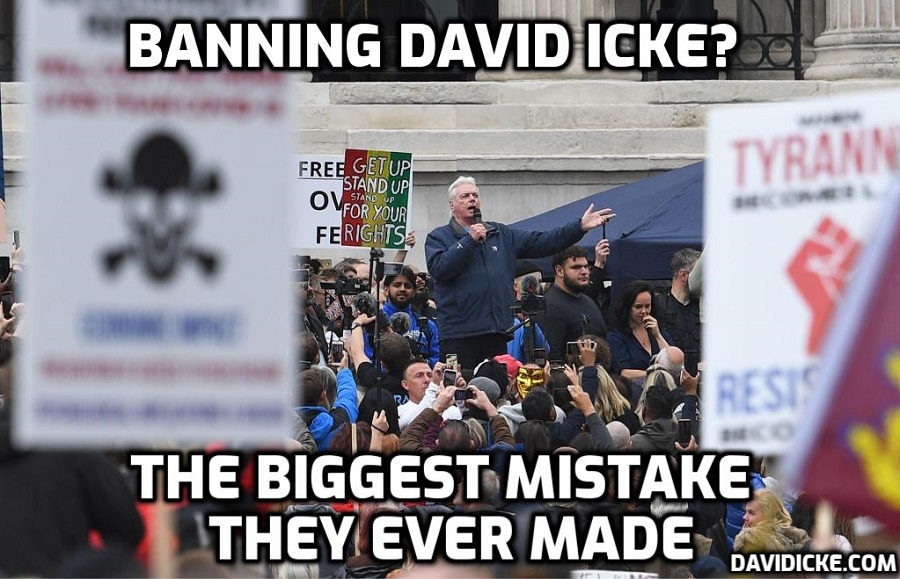 The British conspiracy thinker David Icke has rightly received an entry ban for the Netherlands from the Immigration and Naturalization Service (IND). The ban on entering the Schengen area will not be lifted for the time being, the court ruled on Monday. Professor Jan Brouwer (general law) thinks this is a dangerous development. “The fence is now off the dam.”

Icke had initiated summary proceedings to get the much-discussed entry ban off the table. The Brit was to speak on November 6 at a demonstration of the anti-government coalition Samen voor Nederland in Amsterdam.

The day before, he was denied access to the entire Schengen area, including the Netherlands, for two years. The Briton was already on his way, but turned around. He will appeal against the verdict, lawyer Jeroen Pols says on his behalf. “David is as good as stuck in Britain. He can’t enter almost all of Europe. A disgraceful encroachment on his freedom of movement.”

According to the court, the State Secretary for Justice and Security could rely on reports from the police and the National Coordinator for Security and Counterterrorism (NCTV), which stated that Icke’s arrival would pose a potential threat to public order. Icke has lodged an objection against this, which is still under consideration by the State Secretary.

Professor Brouwer, affiliated with the University of Groningen, is deeply disappointed in the verdict. “I hope that this gentleman will be corrected in the proceedings on the merits, because this is not a good development,” says Brouwer. “If we are going to classify a tasteless opinion under the disturbance of public order, then a lot of people can start to worry.”

For example, according to Brouwer, there are many people within the Forum for Democracy who adhere to the same theories as Icke. “Are we going to prosecute them all? I’m holding my breath for what’s to come. You throw the door wide open with this.” Brouwer emphasizes that he is not a fan of Icke’s ‘nonsensical statements’. “But that’s not what this is about. It’s about freedom of expression.” With this judgment, the preliminary relief judge shows little confidence in ‘the ability of the population to separate sensible and completely nonsensical thoughts’, according to Brouwer.

Associate Professor Berend Roorda and Professor Jon Schilder share the same vision. “It would have shown political courage if the Dutch authorities had clearly communicated that in a democratic constitutional state like ours, even people with objectionable ideas such as David Icke are allowed to use their freedom of expression and freedom of demonstration,” they write in a joint speech.

Icke argued that he wants to spend Christmas with his in-laws in the Netherlands, and therefore asked the court to suspend the entry ban for that period. But the interest of public order outweighs his own interest, according to the judge.

According to lawyer Jeroen Pols, who assists Icke, the entry ban constitutes ‘an impermissible interference with the right to demonstrate and freedom of expression’. The court does not agree with this. “Denying access to the Schengen area is the only effective way to prevent Icke from coming to the Netherlands,” said the judge.

Icke is the purveyor of a conspiracy theory that claims humanity is secretly ruled by alien reptiles masquerading as humans. According to critics, the reptiles are a metaphor for a (partly Jewish) elite.

The preliminary relief judge rules that the State Secretary does not wrongly regard Icke as a spreader of conspiracy theories. “As Icke points out in his appeal, the core message he is spreading is that today’s politicians and policymakers are systematically committing crimes by undermining the rule of law and faking a pandemic to push an agenda and subject the population to medical experiments. It is precisely this kind of thinking that the NCTV warns against in its threat analyses.”

According to Roorda and Schilder, barring a participant from a manifestation is ‘in no way compatible with the core of the fundamental rights at stake’. ‘It is up to an organization to determine who is on the list of speakers and what the subject of their presentation is’, they write in their speech. ‘According to the letter from the State Secretary, the measure was necessary to protect the democratic legal order. However, the opposite has happened.’

Lawyer Jeroen Pols, who represented Icke during the hearing, finds the verdict ‘amazing’. “We are dealing with a thought police. Apparently in this country you are no longer allowed to say what you think or think.” Icke appeals. “He has only accepted an invitation to a demonstration, and then he is not allowed to enter almost all of Europe. We must all realize how far this actually goes.”

Keeping David Icke out is not about the right to freedom of demonstration, but about the application of entry rules for the Schengen area, says Wim Voermans, professor of constitutional law. “Anyone who poses a threat to public order can be denied entry to the Netherlands (more generally the Schengen area). These rules have been rightly and correctly applied according to the court. You don’t get around to the question of whether there is a violation of the Constitution: as said, this decision (the entry ban, ed.) is not about the right to demonstrate or freedom of expression. It is a measure of order.”

According to the CIDI, Icke’s speeches incite “hatred and the erosion of our legal order.” “We will never accept that. Wherever those speeches take place, CIDI will always organize a clear opposition,” the organization writes today on Twitter. ‘There is no place in the Netherlands for people who spread hatred and thereby feed polarization.’