Arctic summer sea ice stopped declining a decade ago, but green activists have spared no effort to continue promoting the poster scare that humans will cause it all to disappear within a few years. In his recent BBC Frozen Planet II agitprop, Sir David Attenborough claimed it might all be gone by 2035. In an excellent piece of investigative reporting titled Lies, Damned Lies and Arctic Graphs, the climate writer Tony Heller recently lifted the lid on many of the tactics used to keep the scare in the headlines. “They bury all the older data and pretend they don’t notice sea ice is increasing again. What they are doing is not science but propaganda,” he charges.

The Daily Sceptic has written a number of articles of late noting that summer sea ice extent in the Arctic is recovering. In Greenland, I recently reported, the ice sheet may have increased in the year to August 2022. Invariably, social media commentators reply by publishing the sea ice graph below, compiled by the U.S. National Snow and Ice Data Center (NSIDC). 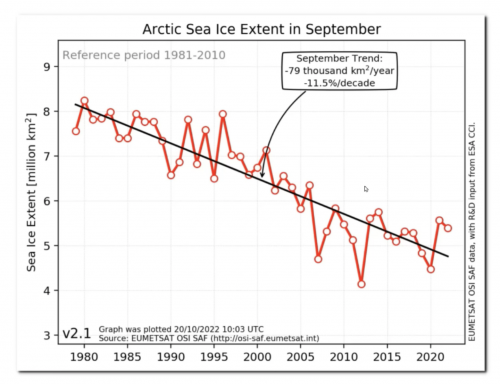 This is reproduced from Heller’s YouTube work and shows a linear decrease in September (the lowest point of annual sea ice) from 1979. There is something wrong with this graph, notes Heller, since the minimum is actually higher now than 10 and 15 years ago, but the crude straight black ‘trend’ line tricks the eye into missing this. He plots the data as a moving average to show the real trend more clearly.

Read More: Arctic Summer Sea Ice Stopped Declining a Decade Ago – But Scientists Have Hidden It