The number of sudden deaths more than doubled since the vaccine was introduced at the end of 2020, jumping from about 6,000 per quarter to 14,000 currently. The difference, 8,000, means more than 80 people each day are dying suddenly and mysteriously, according to a report on the No Tricks Zonewebsite. 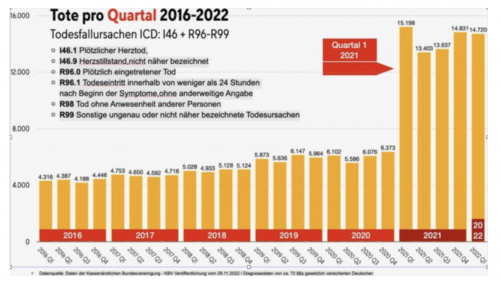 The data based on the insurance records of 72 million Germans come from the Association of Statutory Health Insurance Physicians (KBV), which German parliamentarian Martin Sichert and data analyst Tom Lausen forced to be released. The reason that the German Government’s medicines regulator, the Paul Ehrlich Institute (PEI), has not analysed and published these data before now is unclear. The German government in 2020 standardised the use of insurance data to monitor possible vaccination injury, but this law does not appear to have been followed.

Professor Stefan Homburg, former Director of the Institute of Public Finance at the University of Hannover, tweeted: “Since vaccination began in early 2021, ‘sudden and unexpected’ deaths have exploded. This is shown by the new KBV data of the 72 million insured persons.”