Despite the climate narrative, almost everywhere cold temperatures are much more deadly than heat. Why is the cold more dangerous? Because it causes outer blood vessels to constrict to conserve core body heat, which drives up blood pressure, said Bjorn Lomborg. High blood pressure killed 10.8 million people in 2019  – 19% of total global deaths.

Dr. Bjorn Lomborg is a researcher and frequent commentator in print and broadcast media. He has also authored several books including ‘False Alarm: How Climate Change Panic Costs Us Trillions, Hurts the Poor, and Fails to Fix the Planet’.  Last month he published an article in The Times which challenged a Lancet report stating that rapidly rising temperatures have increased annual global heat deaths among older people by 68% in less than two decades. This is a figure that has been cited all over by corporate media, from the BBC and Time to the Washington Post and the Times of India as well as espoused by United Nations Secretary-General António Guterres. “The [Lancet] report commits an amateur statistical fallacy by blaming the increase in heat deaths on ‘rapidly increasing temperature’,” Lomborg wrote.

In a Twitter thread, Lomborg explained how the cold kills 9 times more than heat.  “When billions of people are exposed to colder than optimal temperatures for large parts of the year, millions die,” he said.  A study published in The Lancet in July 2021 found that for the ten years 2000-2019, 4.6 million people died from cold temperatures compared to 0.5 million from heat.

Although energy prices declined dramatically in the past; in this century, due to “climate change” policies, energy prices have increased. 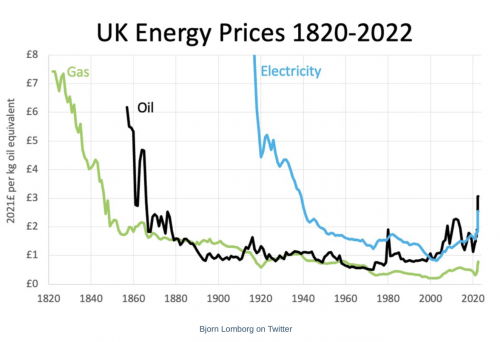 The UK energy bill cost crisis is the result of failed policy decisions stretching back decades.  UK energy costs had more than doubled since 2000 – before the escalation in the Ukraine/Russia conflict began earlier this year – and have risen further by around 90% this year alone.  Yet, the government continues to blame the Ukraine/Russia conflict for high energy costs.

The current crisis is the result of several interwoven policy failures that have rendered the UK electricity system fragile and vulnerable to shock, with British energy policy since 2002 focused on the development of renewable energy, particularly wind and solar electricity, almost to the exclusion of all other concerns. And it is consumers who have to carry the considerable costs as a result of the deployment of renewables.

Read More: How many lives are being lost due to the senseless obsession with net zero?