The public is becoming increasingly disturbed with reports of death among the vaccinated. It is natural to ask “was the death caused by vaccination?” The most definitive way of answering that question is with autopsy. 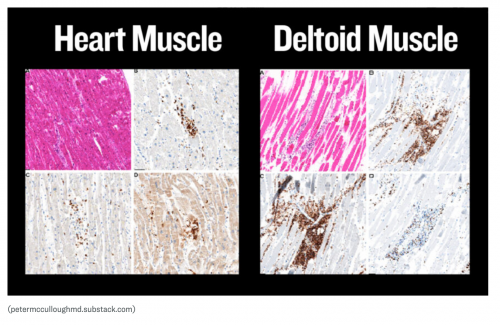 Schwab et al reported on deaths after vaccination with detailed autopsies in Heidelberg, Germany.[i] Of 35 fatalities within 20 days of injection, 10 were ruled out as clearly not due to the vaccine (eg drug overdose). The remaining 25 (71%) had final diagnoses consistent with a vaccine injury syndrome including myocardial infarction, worsening heart failure, vascular aneurysm, pulmonary embolism, fatal stroke, and vaccine-induced thrombotic thrombocytopenia. Interestingly, 5 cases had acute myocarditis as the cause of death with the histopathology in the heart muscle showing patchy inflammation very similar to what was seen in the deltoid muscle were the mRNA vaccine was injected.

So the report has told us:

1) 71% of deaths that occur within 20 days of taking vaccine appear to be due to conditions well known to occur with COVID-19 vaccination,

The very high yield of post-vaccination autopsy should spur families and physicians to push for post-mortem exams so we can learn more on how this medical procedure is leading to such a large loss of human life.