An investigation of official statistics has found that the number of athletes who died suddenly between the beginning of 2021 and April 2022 rose exponentially compared to the yearly number of deaths of athletes officially recorded between 1966 and 2004. 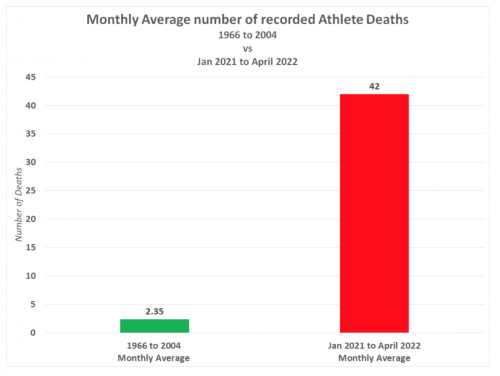 According to a scientific study conducted by the ‘Division of Pediatric Cardiology, University Hospital of Lausanne, Lausanne, Switzerland which was published in 2006, between the years 1966 and 2004 there were 1,101 sudden deaths among athletes under the age of 35.

Read More: Study finds number of Athletes who have ‘Died Suddenly’ has increased by 1700% since COVID Vaccination began