The Office for National Statistics (ONS) publishes weekly figures on deaths registered in England and Wales. The most recent data shows deaths up to 4th November 2022.

The increase during this week can not be blamed on Covid-19 because just 650 deaths were attributed to the alleged disease. This equates to just 5.5% of all deaths. 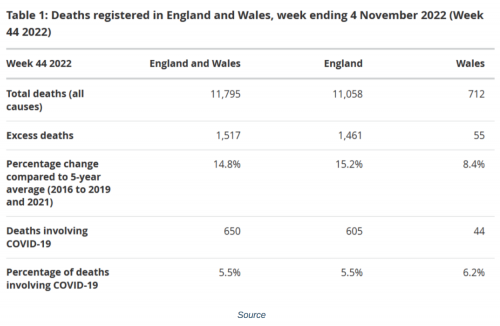 According to the ONS, excess deaths have been occurring in England and Wales on a weekly basis since week 16 (week beginning 18th April) of 2022. So we downloaded their dataset, which you can find here, to deduce just how many people have really died over the past 6 months compared to the five-year average.

Read More: Great Britain has now suffered 41,000 Excess Deaths in the past 6 Months with another 2k in the last week alone