Nothing to do with me guv’ – it was climate change wot done it. And so the excuses get rolled out for the massive recent jump in excess deaths since April. Lockdown fanatic Professor Dame Jenny Harries, the Chief Executive of the U.K. Health Security Agency, repeated the claim last month that more than 2,800 excess deaths were caused by periods of hot British weather in the summer. A more plausible explanation would be that excess deaths have been trending upwards since April due to the disastrous lockdowns and pandemic interventions and the near two year-long disruptions and closures of vital medical, educational, economic and social activities. In all of which, of course, she played a leading role.

Harries, the Deputy Chief Medical Officer for England at the start of the Covid lockdowns, was promoting social restrictions as late as November last year, nearly a full year after vaccines were available. Not that the vaccines are particularly efficacious, giving limited protection for just weeks in many cases and requiring numerous booster jabs. As more novel shots are dispatched, the number of vaccine injuries and deaths is on the rise, helping, no doubt, to push up the excess death totals.

Earlier this month, the Daily Sceptic editor Will Jones reported that a favoured explanation, noted by the British Heart Foundation, was that lack of access to healthcare during the pandemic and NHS backlogs were primarily to blame for the recent glut of excess deaths. “However, many medics and scientists suspect side effects of the vaccines are playing an important role, particularly as this phenomenon is being seen across Europe and further afield, not just in the U.K.,” added Will.

What better way to disguise these disturbing rises than to waffle on about climate change? Only last month, Harries was repeating the 2,800 excess deaths tale, stating: “If several aeroplanes all exploded and we’d lost that many people it would be frontpage news in health protection terms.” Maybe for climate change stories, the cynical might note, probably not for Covid vaccine deaths. 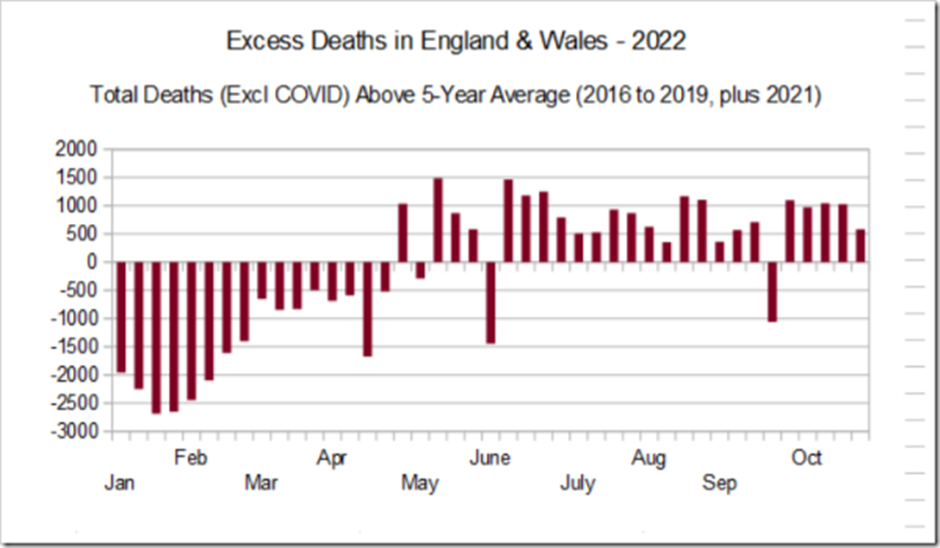