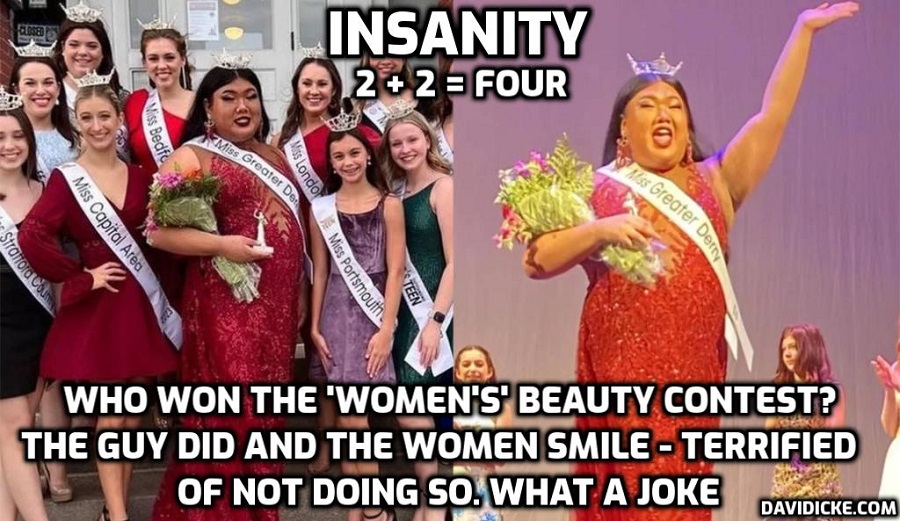 When glamour model and reality TV star Leilani Dowding heard that a biological male had won the Miss Greater Derry beauty contest, she was gobsmacked. Seeing photos of the winner only made it worse.

No stranger to beauty pageants, Page Three girl-turned-news-presenter Leilani Downing felt compelled to speak out about the news that 19-year-old biological male Brian Nguyen had been crowned Miss Greater Derry 2022. (This is Derry in the US by the way, not Derry in Northern Ireland.)

The win has been lauded by much of the trans community as a milestone, a triumph and a turning point. It’s a perfect example of gender inclusivity and, in the eyes of many, should be applauded

In her article for ‘The Daily Fetched’, the former Miss Great Britain, who won the contest aged 18 and is now 42, did not mince her words. Young Brian, on the other hand, a self-professed transgender woman, business management student and social media influencer, minced rather nicely across the stage on the day of the win in a body-hugging red evening dress and high-heeled sparkly sandals.

“I won the Miss Great Britain competition in 1998,” days Bournemouth-born Leilani, “and aside from all the glitz and glamour on the surface, it involved a lot of time and effort. Seeing the news that Brían Nguyen won the pageant made me think how I would feel if I was beaten by a large biological male after spending months training and preparing for the contest. Winning the competition opened up a world of opportunities to me, a result of being allowed to fairly compete in an era absent of woke ideology. Sadly these young women today are not being given the same chance.”

The Miss Greater Derry Scholarship Program, set up by the Miss America Organisation, claims to provide “scholarship opportunities to young women in the greater Derry area since 1987.” The competitions first started in the 1920s.

American/Vietnamese Brian is chuffed though. He took to Instagram to share the news of becoming the ‘first transgender titleholder.’ “No words can describe the feeling of having the opportunity to serve my community and represent my community for the very first time at Miss New Hampshire. I am so honored to be crowned your new Miss Greater Derry 2023, and I am thrilled to show you all what I have up my sleeves…”

(As long as it’s just the sleeves…)

But Leilani – the first woman of Asian descent to represent Great Britain in the Miss Universe competition – can’t see this happening. “Allowing a transgender-identifying biological male to win a contest without merit hardly gives young women opportunities,” she declares. “If anything, it is indoctrinating them into a perverted idea of what female beauty is, blurring the lines of societal markers which sets precedents for decline rather than growth.”

Seeing men who identify as women compete in women’s sports tournaments has almost become the norm now. Spectators barely bat an eyelid when a tall, broad-shouldered, narrow-hipped competitor steps in the arena, onto the pitch or into the pool. Even if a pair of nadgers were hanging out of the leghole of a bathing suit, people would politely turn a blind eye. If that individual – the one with the baritone voice and escaping testicles – says they’re a lady, then they’re a lady. End of.

But it hasn’t always been thus. Back in the old days, to be transgender and to be accepted as such, there were rules. Before a chap could have any surgery, he’d have to live as a woman for years. Living as a woman basically meant dressing in blouses not shirts and skirts instead of trousers and maybe donning a pair of heels and wearing a smattering of make up. The man would re-learn how to walk and sit and generally act a bit more dainty. He could say “I’m a lady” until he was blue in the face but until he’d had the chop, he wasn’t generally considered female. Until the operation, he was considered a mere transvestite.

Now THERE’s a word you don’t hear too often these days: transvestite. There’s no use for it any more. Cross-dressing is so common these days, it isn’t even a ‘thing’. It’s just dressing. It’s all very straightforward. Similarly, If a man announces he’s a woman, then that’s all it takes. The same applies to biological females who decide they are male or non-binary. A chest-binder and a few checked shirts and Barb’s your uncle!

But back to beauty queen Brian… According to Leilani – a petite and pretty biological female – there was no real reason for Brian to have won. Of course beauty is in the eye of the beholder, but Bryan is not – shall we say? – beautiful in the traditional sense. And these contests are traditional and most of the contestants have a certain look, one that doesn’t really match Brian’s. As Leilani says: “Brían Nguyen did not have any advantages; apart from being an overweight transgender-identifying individual, a far cry from what society would have once classed as a ‘natural beauty.’ His testosterone and large build definitely didn’t score any advantages, but what helped was society’s increasingly ‘woke’ desperation to signal ‘inclusivity’. Bryan Nguyen has just been lucky enough to be born in the right era.”

Oddly, the contest’s organisers were in no way obliged to permit a biological male – trans or otherwise presumably (can’t discriminate against cis men!) – to enter the competition: they just took it upon themselves to allow it. According to a federal court ruling, Miss United States of America pageantscannot be forced to include transgender contestants. This is in the wake of a lawsuit filed against the organization where they claimed to be victims of discrimination.A rule in the organization stated that contestants must be “natural-born females.” BUT – and this is a BIG but (ahem) – the organization also has the First Amendment right to determine who competes in their competitions. It adheres to guidelines such as those participating must not have posed nude in the past and must not be convicted felons. It is also essential that they must be American citizens. Maybe Bryan fancied giving it a shot, applied and the organisation discovered that anti-discrimination rules made it that he couldn’t be turned away. Whatever happened, Bryan ended up entering the contest and winning.

Leilani sees this as an insult to natural-born women everywhere. She says bluntly: “The winner of that competition got a scholarship and prize money and it went to an overweight man caked in make up!”

As Leilani points out in her article, this isn’t the first involvement of transgender women in the world of beauty contests. In October this year, a trans woman from Thailand bought the Miss Universe organization. And last year, a transgender contestant named Kataluna Enriquez took the title of Miss Silver State USA.

All well and good if the contestants fit the criteria but it’s highly likely that the rather rotund and very unhealthy-looking Bryan doesn’t. Let’s face it, Brian sticks out like a sore thumb in all the online photos and videos. OK, so Bryan may have a certain charm and can move debatably gracefully (for a heavy person in stilettos anyway), but it’s just strange that no one seems to have the guts to call out the emperor and point out that this contestant wouldn’t actually be considered by the majority to be particularly attractive. Beauty contests are – whether you agree with the idea of them or not – a bit antiquated and are all about consensus. Well, they used to be. Maybe people who don’t get this ‘new normal’ are just old-fashioned, un-PC or simply out of touch.

Leilani, who’s engaged to The Cult guitarist Billy Duffy, believes it’s an attempt to blur the lines between masculinity and femininity, and decimate what it means to be a woman. “The destruction of the West isn’t just about taking down the economy,” she explains, “but also the very fabric of what we define as beauty, amid the complete collapse of culture and morals.”

She adds: “Trans biological men winning beauty pageants should serve as a line in the sand for women everywhere, a stark warning that this agenda will continue relentlessly unless we grow a backbone. Women need to stand up against this madness without the fear of offending or being cancelled by the ‘woke’ mob.”

But, until then, Brian Nguyen, crown firmly in place, reigns. His win opens the door for other transgender people to enter beauty contests the world over. Although maybe not in the Middle East. Can’t see it happening there. But that’s another story.