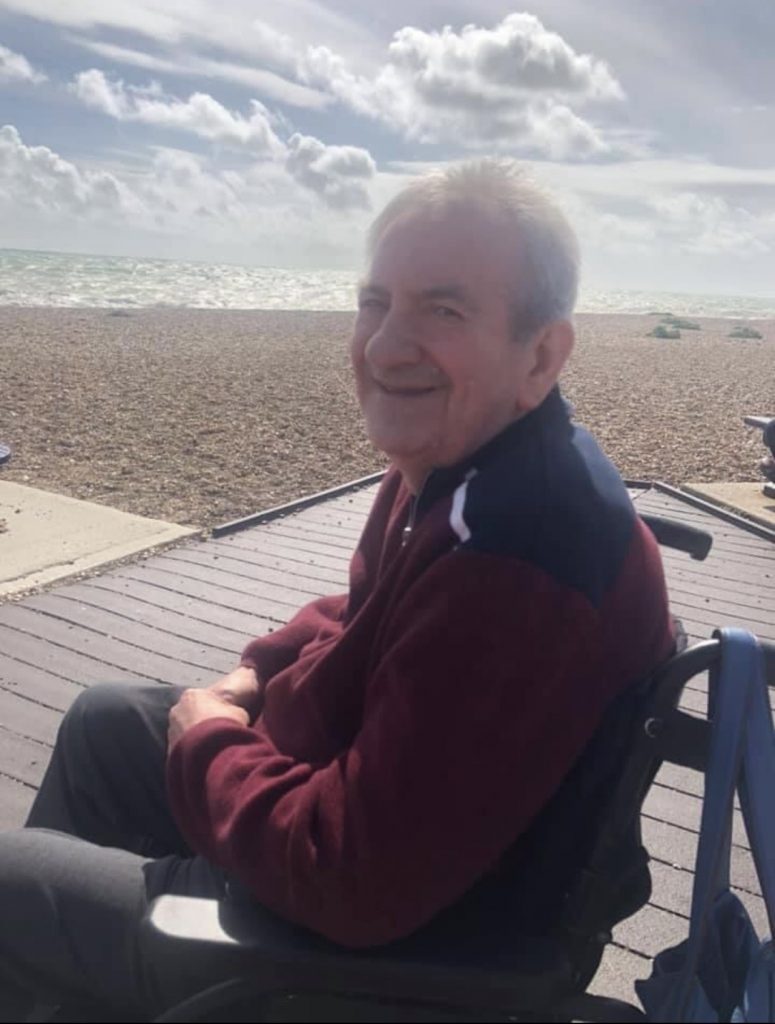 On September 24th 2021, a psychopathic paramedic injected my dad with a big shot of something. Then told me she hadn’t. She told me she hadn’t had time to give him anything, that he died before she had the chance. I know otherwise.

My dad, who was recovering from a stroke but who was well otherwise, died about 30 minutes after the injection.

On the ambulance report I received several weeks later, one of the paramedics wasn’t even listed as being present that day. When I asked why, I was told it was a computer error and they sent a new report. This new report listed six paramedics as being at my dad’s house that day. Only three were actually there – a silent one, a mouthy one and a murderous one.

I was halfway up the motorway when I got the news that my dad had “gone”. (That’s the word my eldest daughter used when she called me after I’d pulled into Clacket Lane service station. “Grandad’s gone,” she said.)

I wasn’t expecting him to go. I’d packed enough clothes for a few days’ stay. I’d spoken to him on the phone the previous evening and he said he was fed up so I was going to spend some time with him and cheer him up. That wasn’t to be.

As soon as I’d told the mouthy paramedic on the phone not to give my dad Midazolam and not to give him morphine and that I knew the current protocols when it came to the elderly with regards to frailty scores and ‘care’ pathways, he had it in for me. I was already in the car, about to set out, when I had that phone conversation. I asked the paramedic to tell my dad I was on my way. My dad’s carer told me later that the paramedic did no such thing.

What the paramedic DID do, according to my dad’s carer, was joke about me when he came off the phone, suggesting that I was a bit of a know-it-all. His actual words were – again, according to my dad’s carer – “if she hadn’t been the daughter, I’d have told her to f*** off.” He then called the local surgery. My dad’s GP wasn’t there so the paramedic spoke to a GP who’d only met my dad once. He, according to the ambulance report, told the paramedic that my dad had terminal cancer, that he was at “end of life” and that he was receiving palliative care. None of this was true. Perhaps he’d got my dad mixed up with another patient. Or perhaps he thought that it was time for my dad to die. He was 78 after all and had already had three stays in hospital in the previous 12 months. (Another black mark against a person as there’s a kind of ‘three strikes and you’re out’ policy in place in most hospitals these days.)

The paramedics collected end of life drugs (Midazolam, morphine and Haliperidol) – as prescribed by the idiot GP – but later told me they didn’t use them. As I’ve already mentioned (but want to emphasise), the lying paramedic – an angel-faced girl of 21 called Hannah – told me on the phone minutes after my dad’s horrendous and undignified passing that they’d not administered any medication at all.

My dad’s carer told me, however, that before she was sent out of the room, the mouthy paramedic asked my two stepsisters (who’d turned up to visit my dad that morning) whether there was a DNR in place. The stepsisters said there was. There wasn’t. In fact, I’d made sure there wasn’t and also made sure that this information was very prominent on my dad’s medical records. I have emails to prove it. The mouthy paramedic then told the stepsisters that I’d told him I had power of attorney for my dad’s health and welfare but that he didn’t believe me. The stepsisters said they didn’t believe me either. I had power of attorney and have all the paperwork to prove it.

(The carer later told me she’d overheard the two paramedics discussing whether to give my dad 2.5mgs or 5mgs of Midazolam. Whether they administered it or not, I’ll never know, although a syringe packet was found in the outside bin later that day. I still have it.)

Had I got there in time, I’d have refused to leave the room. Had I left my house earlier, or lived closer or gone to see him the night before, things would have been different. He might even still be alive. He was fed up but he wasn’t ready to die.

A few weeks after the funeral, I reported – what I believe to be – a murder to the police. They feigned interest and pretended to look into it. Eight months later, in July this year, they closed the case. “No further avenues of investigation”, they said. At this point, as far as I could tell, there had been NO investigation whatsoever.

A few days after my dad was killed, I spoke to his GP. She was shocked. I asked her why he’d died. She said she didn’t know but that she hadn’t been expecting him to die so soon and so suddenly. She was as mystified as I still am and said that the other GP had acted very badly. I recorded our conversation. I still have the recording. She was genuinely upset and seriously shocked.

The police told me they’d spoken to the stepsisters, who said the paramedics did a fine job. (Didn’t they just?) The police didn’t speak to my dad’s GP, nor to the GP that prescribed end of life drugs for my dad. The police didn’t interview the paramedics. I told the police everything my dad’s carer had told me. (She was too traumatised to give a statement.) They told me that was just hearsay and that even if she HAD given a statement, it would mean nothing as she wasn’t actually in the room when my dad died. Whatever I said would also count for nothing apparently as I wasn’t there.

I complained. The police sent me a complaints form by email. I had a dream about my dad telling me to “leave it” and, so far, that’s what I’ve done.

The photo above is of my dad after I took him out of the care home. We went to the seaside. He loved the sea. Made him happy. I scattered his ashes there.

Oh, and by the way, the report from the London Ambulance Service showed that my dad HAD been injected – with glycopyrronium bromide, a drug he’d never had before. It was administered by young paramedic Hannah and, in my opinion, caused a fatal reaction. Well done, Hannah, for doing the government’s bidding. And well done too for lying through your perfect little teeth.