These were Putin’s special forces, in unmarked uniforms and vehicles, who grabbed the precious peninsula for the Kremlin – and began a war that exploded into bloodshed, carnage and devastation across their land this year.

‘Everything started with Crimea and will end with it,’ declared President Volodymyr Zelensky two months ago. ‘Crimea stands with Ukraine and is waiting for us to return. I want you all to know, we will definitely be back.’

Bold words from a brave leader, spoken shortly before his forces made a stunning breakthrough in eastern Ukraine that dramatically changed the narrative of this dispiriting war.

Now Ukraine is advancing towards that goal of liberating Crimea, the ultimate prize in this cruellest of conflicts. 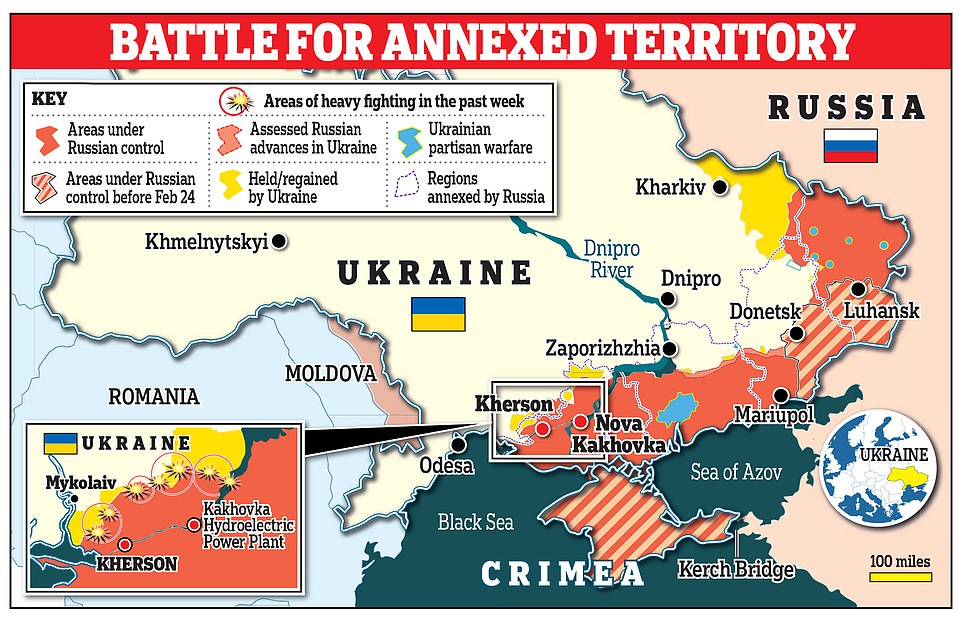 Its forces are moving forward in the key southern region that supplies the peninsula’s water, mounting daring raids on military sites across the area — and sparking fears, which escalate with each mile of advance, that Moscow might respond with the use of nuclear weapons.

For the 2014 annexation may have been illegal but it was wildly popular in Russia. It was a defining moment for Putin, supposedly fulfilling his pledge to restore his nation’s greatness after the collapse of the Soviet empire.

The seizure caused Putin’s support to surge to record levels as he claimed: ‘Crimea has always been an integral part of Russia in the hearts and minds of people.’ He talks about it in mystical terms, describing it as a ‘sacred place’ and their ‘holy land’.

This is the dictator, after all, who has posed as a successor to the great Russian Tsars such as Peter the Great — who launched his nation’s imperial expansion with a battle in central Ukraine at the start of the 18th century — and Catherine the Great, who captured Crimea in 1783.

Putin’s brazen theft of Crimea underscored his own propaganda by expanding Russia’s terrain. Now he claims to be the strongman standing up for his people, absurdly proclaiming that he will protect them from ‘Nazis’ in Ukraine and Nato.

Read More: Why Ukraine is now hellbent on retaking Crimea