Is it too much to expect that someone in a position of authority will announce that the alleged threat from monkeypox is over? There is hardly a newspaper article about it, the U.K. had only approximately 3,500 recorded cases and even the BBC has told us that “The U.K.’s monkeypox situation is looking ‘very positive’ with cases continuing to fall”. Putting these figures in perspective, the percentage of people in the U.K. infected with monkeypox is 0.005%. Your chances of meeting someone with monkeypox is less that one in 100,000 – already negligible – but when you take into account that monkeypox is more prominent among men who have sex with men, then the average person would really have to make an effort to contract it. 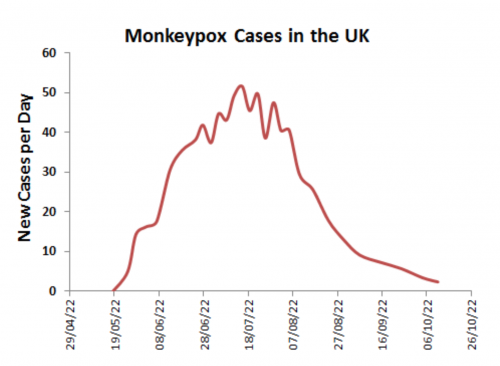 I have long been writing about the purported monkeypox pandemic in scathing terms, asking “who’s afraid of the big bad monkeypox?“, and asking monkeypox to “raise its game“, reckoning that it had “bugged out“, that health experts in the U.K. were panicking, not because there were lots of deaths, but because there were none and should, therefore, “drop the dead monkeypox“. It is worth being reminded that of approximately 57,000 confirmed infections worldwide, only 22 have died and even Nature, usually at the forefront of fearmongering about all things pandemicky, says that this represents “a death rate of about 0.04%”.

Read More: Monkeypox Has Fizzled Out, But the WHO’s “Public Health Emergency” Lingers On