A local radio host died from a suspected heart attack while presenting his daily breakfast show.

Tim Gough, 55, was presenting his morning programme for GenX Radio Suffolk when the music stopped playing half way through a song, about an hour into his slot.

The music resumed a few minutes later but Mr Gough, who had been speaking just moments earlier, did not return and later the station confirmed he had passed away.

GenX Radio Suffolk posted on their social media accounts: ‘It is with the heaviest of hearts that I have to inform you, our dear friend and breakfast host Tim Gough passed away this morning whilst presenting his program.

‘Our love to his family, son, sister, brother and mum. 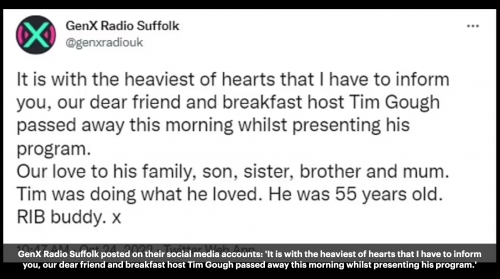