A damning new report has blown open the process by which some of the science work presented by the UN’s Intergovernmental Panel on Climate Change (IPCC) is twisted to fit a political narrative through the accompanying Summary for Policymakers (SPM), which is compiled by governments. Further spin is then applied by press releases, which are reported mostly without question by the incurious media. The investigative report written for the Global Warming Policy Foundation (GWPF) shows a large gulf between the science presented and the perception of the public. The progression from the initial IPCC report to press release provides “ample opportunities” for the message to be distorted, “either wilfully or not”.

In the latest Summary for Policymakers issued last year, the ‘infamous hockey stick’ was revived showing little global warming over 2,000 years, and a sudden, dramatic uptick over the last 150 years. The hockey stick first appeared in the third IPCC assessment report in 2001 but was omitted from subsequent work. It was the creation of the IPCC author Michael Mann, and was widely debunked since it ignored the higher temperatures in the medieval warming period (MWP) and subsequent cooling in the little ice age (LIA). 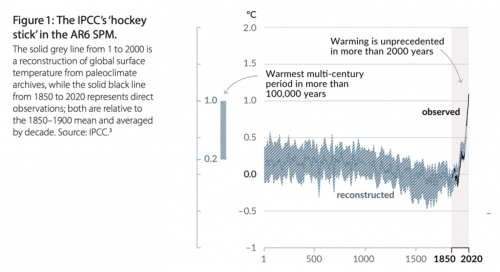 Figure 1 above “illustrates very clearly” how the science can be lost in translation, the report notes: “Figure 1, or discussion of it, does not appear anywhere in the body of the report”. Yet the SPM is presented as an easy and more concise guide to the full AR6 IPCC report.