A few weeks ago, I covered the work of David Rozado. He’s a computer scientist who’s been using his coding skills to analyse the frequency of woke jargon across millions of news articles.

Rozado finds that, beginning in the early 2010s, the frequency of terms like ‘racist’, ‘sexist’ and ‘transphobic’ in the news media began skyrocketing. And this pattern is visible not only in the Britain and the U.S., but also in Spain. (Though in Spain’s case, ‘racist’ and its synonyms have increased in frequency somewhat less than the other two.)

Rozado’s been rather busy, and he’s just come out with another big analysis. For his latest project, he analysed the frequency of “terms denoting prejudice” across millions of academic articles to see whether the same pattern held there. (For technical reasons, his analysis is limited to the titles and abstracts of articles.)

What did he find? That the ‘woke hockey-stick’, as one might call it, is not confined to the news media. His main finding is shown below. 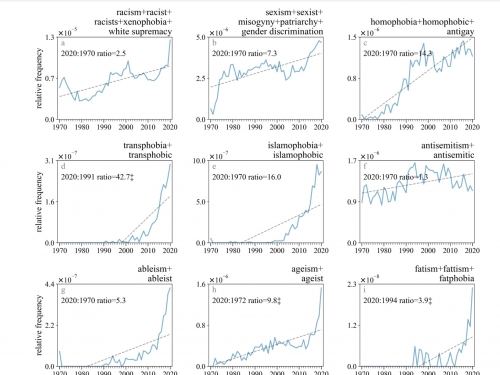 With the exception of ‘homophobic’, ‘antisemitic’ and their synonyms, there’s a dramatic increase in the frequency of all terms, beginning in the early 2010s. The increase is particularly dramatic for ‘transphobic’, ‘Islamophobic’, ‘ableist’, ‘ageist’ and ‘fatphobic’.