Official data made available by the U.S. Government and Centers for Disease Control strongly suggests that fully vaccinated Americans may be developing Acquired Immunodeficiency Syndrome or a similar disease that is decimating the innate immune system.

But they are not alone, because further data made available by the UK Government and the Government of Canada suggests the vaccinated population in both of these respective countries are also developing the debilitating condition. 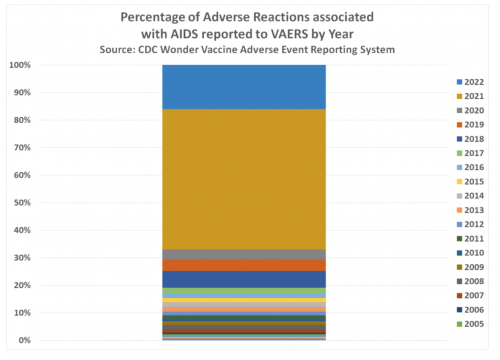 It’s a common misconception that Acquired Immunodeficiency Syndrome (AIDS) is only caused by the HIV virus. This simply isn’t true.

Acquired (or secondary) immunodeficiency is one of the major causes of infections in adults. These immunodeficiency disorders affect your immune system partially or as a whole, making your body an easy target for several diseases and infections. (Source)

When immunodeficiency disorders affect your immune system, your body can no longer fight bacteria and diseases. (Source)

Several factors in the environment can cause secondary immunodeficiency disorders. ‌(Source)

Some common ones are:

But some of the less common causes include Drugs or medications. (Source)