Recently, an exclusive investigation carried out by the team at The Exposé forced the European Union to launch a Europe-wide investigation into why so many children have died and are still dying since the European Medicines Agency first approved the Covid-19 vaccine for children.

Now a second investigation conducted by the team at The Exposé has forced the Scottish Government to launch a country-wide investigation into why so many newborn baby deaths have occurred across the country since Government & Health Officials outrageously claimed the Covid-19 vaccine was safe for pregnant women without any evidence to back up those claims whatsoever. 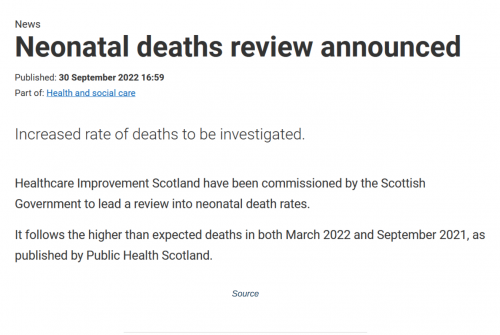 On the 30th of September, the Scottish Government announced it was finally commissioning a long overdue investigation into neonatal deaths across Scotland since the Covid-19 vaccine was first approved.

The investigation is finally being launched months after an exclusive investigation carried out by The Expose revealed that newborn baby deaths had hit what was considered to be ‘critical levels’ for the second time in seven months in March 2022. After previously hitting critical levels in September 2021.

The Scottish Government says that “the review will cover all reported deaths across Scotland between 1 April 2021 and 31 March 2022 to find out if there is anything that may have contributed to the increase. Anything identified will feed into recommendations and actions to improve the quality of care for mother and babies.”

Unfortunately, the review is expected to take between six and nine months. This means many more newborns could sadly die before the Scottish Government finally admits Covid-19 vaccination is to blame for this shocking rise in neonatal deaths.

The discovery of these record-breaking deaths came after it was quietly revealed that both Pfizer and Medicine Regulators hid the dangers of Covid-19 vaccination during pregnancy because the only study conducted found it increases the risk of birth defects & infertility.

Public Health Scotland (PHS) has a full dashboard on Covid-19 wider impacts on the health care system, found here, and it includes a whole range of data from mental health statistics to pregnancies, cardiovascular disorders data, and cancer.

Official figures reveal that the rate of neonatal deaths increased to 4.6 per 1000 live births in March 2022, a 119% increase on the expected rate of deaths. This means the neonatal mortality rate breached an upper warning threshold known as the ‘control limit’ for the second time in at least four years.

Read More: Government forced to launch Investigation into shocking rise in Newborn Baby Deaths since the COVID Vaccine was approved