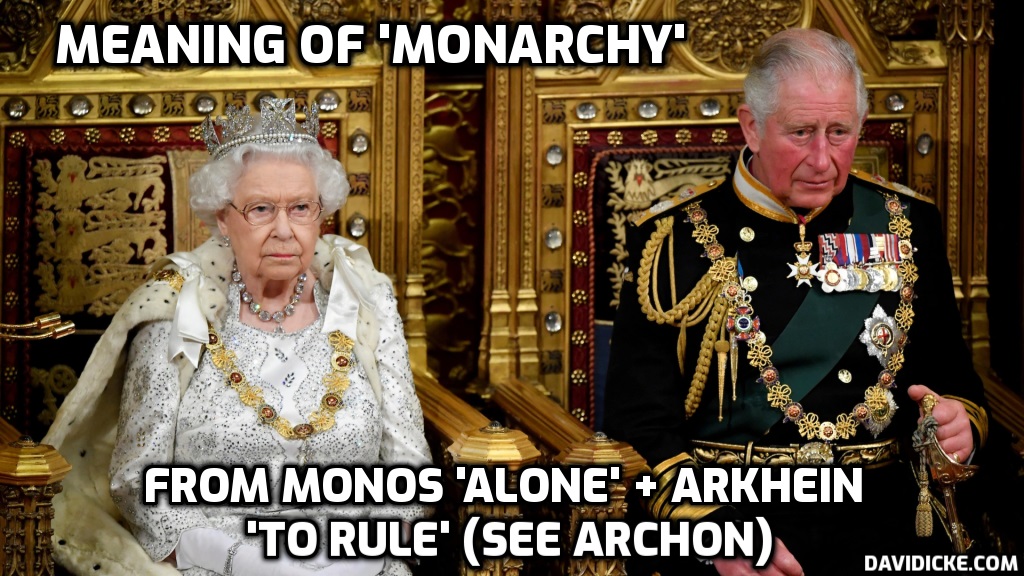 mid-14c., monarchie, “a kingdom, territory ruled by a monarch;” late 14c., “rule by one person with supreme power;” from Old French monarchie “sovereignty, absolute power” (13c.), from Late Latin monarchia, from Greek monarkhia “absolute rule,” literally “ruling of one,” from monos “alone” (from PIE root *men- (4) “small, isolated”) + arkhein “to rule” (see archon). Meaning “form of government in which supreme power is in the hands of a monarch” is from early 15c.

Archons are, in Gnosticism and religions closely related to it, the builders of the physical universe. Among the Archontics, Ophites, Sethians and in the writings of Nag Hammadi library, the archons are rulers, each related to one of seven planets; they prevent souls from leaving the material realm. The political connotation of their name reflects rejection of the governmental system, as flawed without chance of true salvation. In Manichaeism, the archons are the rulers of a realm within the ‘Kingdom of Darkness’, who together make up the Prince of Darkness. In The Reality of the Rulers, the physical appearance of Archons is described as hermaphroditic, with their faces being those of beasts.