The number of people not in work in the U.K. has grown by 246,000 in the past 12 months and by 641,710 since the start of the pandemic, new official figures released this morning show. Of the increase since February 2020, 352,011 is due to an increase in the number of long-term sick. While the official unemployment rate decreased in the last quarter by 0.2 to 3.6%, this conceals a huge rise in economic inactivity classified in other ways including long-term sickness. Ross Clark takes a look at the figures in the Spectator. 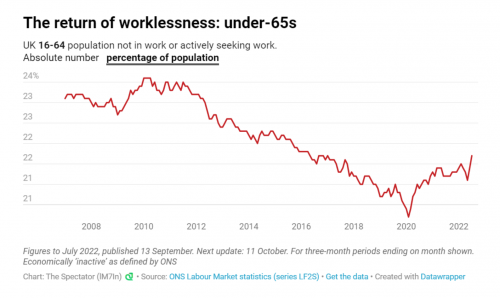 Ross asks if the virus is to blame.

Is this the result of long Covid, or is it a return to the bad old days when governments used to massage unemployment figures by shunting as many people ‘onto the sick’? Today’s ONS release, sadly, can’t tell us this. But there has been a remarkable turnaround since the pandemic.

Read More: Number of Long-Term Sick Increases by 350,000 Since Start of Pandemic