The Arctic has been a happy hunting ground for the climate scaremonger Sir David Attenborough. Two years ago he made the fanciful claim that polar bears could die out in the 2030s. It is now generally accepted that polar bears have been thriving and increasing in numbers, and in his latest BBC documentary Frozen Planet II, Attenborough makes no mention of his previous claim. But he does make the astonishing suggestion that all the summer sea ice in the Arctic could be gone within 12 years.

Unfortunately, such predictions are now out of date. Summer sea ice hit a low in 2012 and has been steadily recovering ever since. According to the latest data from the US-based National Snow and Ice Data Center (NSIDC) for the end August, “Sea ice extent is likely to remain higher than in recent years.” The evidence is shown in the graph below. 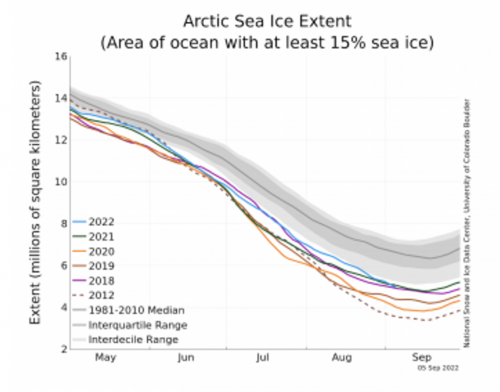 As can be clearly seen, the 2022 blue line is well above the 2012 low point. According to the NSIDC, average sea ice extent for August ranked 13th lowest in the recent satellite record. The growth of Arctic sea ice has been confirmed by a number of sources. The EU weather service Copernicus reported that the coverage of Arctic sea ice is now very close to the 1991-2020 average.

Attenborough’s script may well have been written for him some time before this latest data started to cast real doubt on further Arctic sea ice decline, at least in the short term. His claim that it could all suddenly vanish seems have been taken from a paper written in 2020 by a group of academics working with the Met Office’s Hadley Centre. As with all climate forecasts, the claim is the product of a computer model. It is said that the latest model – HadGEM3 – simulates a more accurate interglacial climate. This seem to have led the academics to think they can now confidently predict all the summer sea ice in the Arctic will disappear within 12 years.