Hollywood actress Jennifer Lawrence admitted in a recent interview she’s had a falling out with conservative family members and has frequent nightmares about Fox News host Tucker Carlson.

BREAKING: Mega actress Jennifer Lawrence reveals she had a falling out with her Republican family over repealing Roe, asks how they could “raise a daughter” and not think she deserves equality, also says she had nightmares about Tucker Carlson. RT TO THANK HER FOR SPEAKING OUT!

According to an interview with Vogue magazine, a rift between Lawrence and her conservative Kentucky family members began when Donald Trump won the 2016 presidential election.

The “Hunger Games” star also admitted she has had to seek therapy over her “recurring nightmares” about Tucker Carlson. 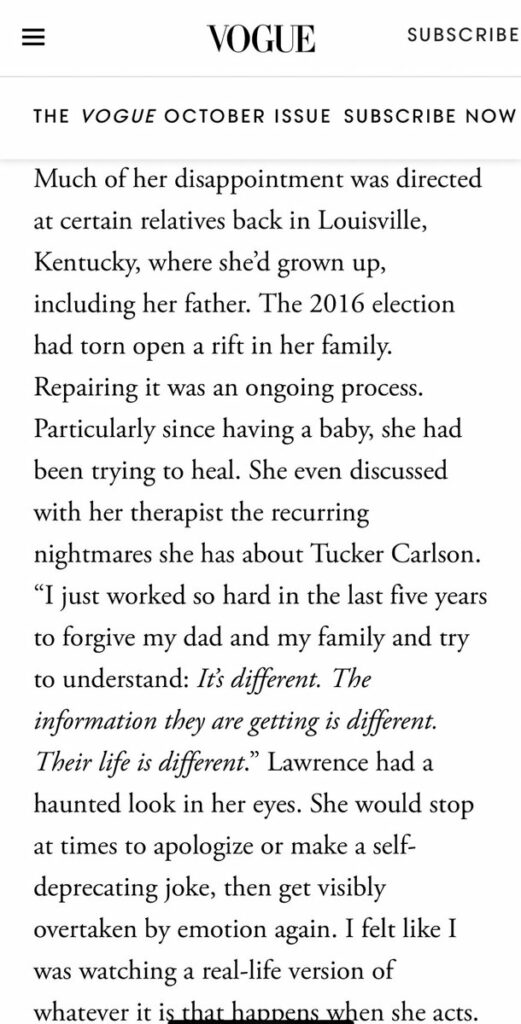 The movie star said in the article the feud with her family was exacerbated after the overturning of Roe v. Wade by the Supreme Court, a non-partisan group of constitutional scholars appointed by presidents representing both political parties.

Jennifer Lawrence says a riff with her Republican family was reignited over Roe v. Wade. She also has nightmares about Tucker Carlson.

“I don’t want to disparage my family, but…How could you raise a daughter and believe she doesn’t deserve equality?” https://t.co/FAgIxxaObc