Despite earlier warnings to reduce usage, Californians – in all their self-righteous virtue – decided to charge their EV anyway, pushing demand above capacity. 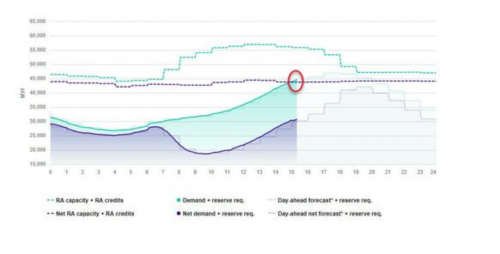 “The reality is we’re living in an age of extremes — extreme heat, extreme drought.”

…and extreme lack of grid preparedness for your state’s virtue-signaling.

Update (1600ET): As the day went on, California warmed up more than expected and that has prompted California’s grid operator to issue a specific warning of the potential for power shortfalls that could lead to blackouts on Wednesday night.

Officials asked residents to cut back on power use Wednesday between 4 and 9 p.m. as temperatures soar above 100 degrees Fahrenheit.

“This is a manifestation of what CAISO warned folks about back in May, that unless they see voluntary curtailments the grid could become unstable during certain periods of high demand,” said Gary Cunningham, director of market research at risk management firm Tradition Energy.

“In this case it is extreme heat that is causing it, but overall weakness in the supply picture are adding to the issue.”

The heat poses the biggest test to the grid since the summer of 2020, when rolling outages engulfed portions of the state.