An NHS trust is using the term ‘birthing people’ instead of ‘mothers’ in the latest woke language row to engulf the health service.

NHS Norfolk and Suffolk Foundation Trust (NSFT) posted on social media that it was seeking ‘birthing people’ to provide feedback on its perinatal services.

Perinatal care is a broad term for the treatment a woman receives both while she is pregnant and for the 12 months after she gives birth.

But NSFT, which specialises in mental health treatment, was accused of leaving biological females out of the conversation by its failure to use the terms ‘women’ or ‘mothers’ in its communications.

‘Our team are developing a Perinatal Voices Partnership networking group, for Birthing people who have had experience of using Perinatal Mental Health Services within Norfolk and Waveney,’ its Tweet reads.

Some members of the public called it ‘dehumanising’ and ‘dangerous nonsense’.

Meanwhile, health experts called it a clear example of ‘desexing the language of female reproduction’ in the NHS.

They said the health service needed to ‘reflect’ on the potential damage caused by promoting such language. 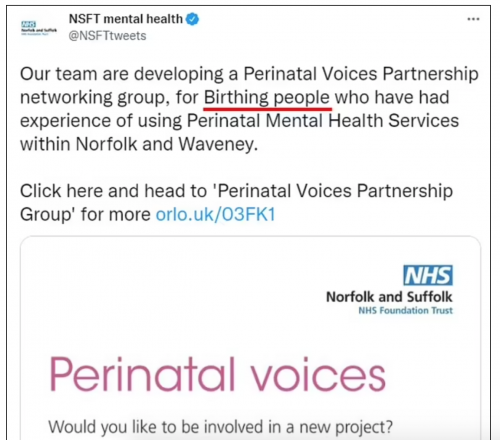 Read More: So much for the crackdown on NHS wokery! Fury as ANOTHER hospital trust starts calling mothers ‘birthing people’