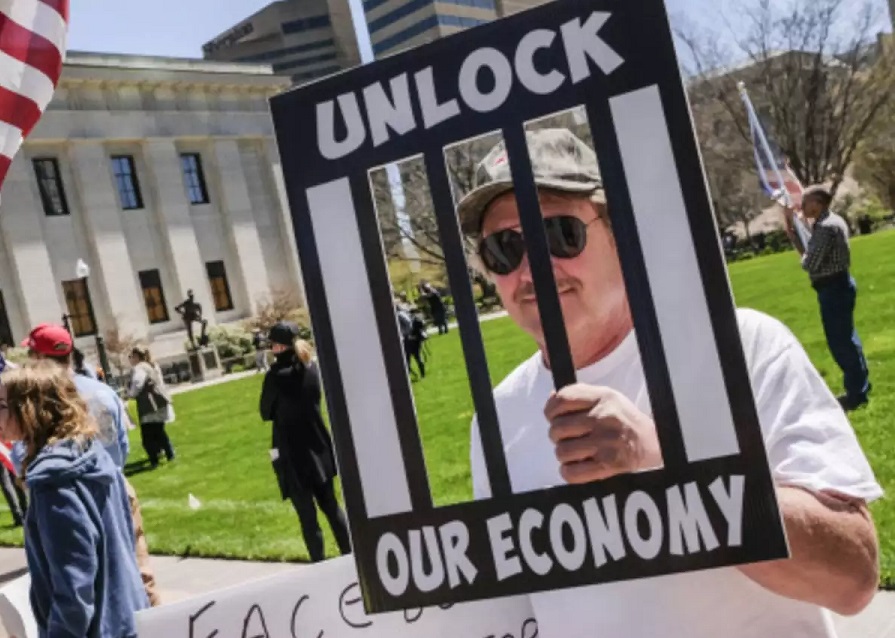 The possibility of U.S. lockdowns—never attempted on this scale in the history of pandemics—was already in the air in early March 2020. The theory of lockdown had been floating around for 15 years but now China was first to try it, and claim enormous success, however fraudulently.

Incredibly, the United States was set to try it out too but getting Trump on board was going to take some doing. The federal government had the quarantine power since 1944. That much we knew. But just how expansive could its exercise be? Would they dare quarantine the well with the sick? How far would this go?

Thanks to several journalistic accounts, we have a better idea of what went on in the White House before the dreadful March 16, 2020, press conference of Donald Trump, Anthony Fauci, and Deborah Birx in which the lockdowns were announced. Along with that came a flier with tiny print about which the ever-trusting Trump apparently knew nothing: “bars, restaurants, food courts, gyms, and other indoor and outdoor venues where groups of people congregate should be closed.”

Read those words again. Has anything like this ever been issued by any government in the history of the world, before China did it? I cannot think of a case. It shuts not only the places where people do “congregate” but also everywhere where they might congregate. Churches. AA meetings. Civic clubs. Libraries. Museums. Homes! And this happened under Trump’s watch right here in the United States! There ought to be a word to describe something more extreme than totalitarian.

There were a number of people in Trump’s circle in those days who proved panicked and confused enough to embrace the idea. But who precisely wrote those words in the sheet handed out to reporters?

We cannot say for sure but Trump’s son-in-law Jared Kushner played an important role. He had enlisted two close friends from college to help: Nat Turner and Adam Boehler. Both were graduates from the Wharton School, like Trump. Jared somehow believed that they knew something about pandemics because they worked in health-care delivery. So, he called them.

Boehler headed the $60 billion U.S. International Development Finance Corporation and still does. It’s one of those many agencies that throws contracts and cash to big shots within industry. Before that job, he was head of Landmark Health delivery services, which means that he knew business and finance, not public health. He is among those high-finance execs who were drawn to healthcare not for the science but for the money.

As for Turner, he is a serial entrepreneur who got his start selling snakes from his parents’ garage. Truly. He founded an ad agency that he eventually sold to Google 10 years ago, Invite Media, for more than $70 million. His company Flatiron—oncology-related electronic record software—sold to Roche in 2018 for $1.9 billion. His page at the Wharton School describes him as “Young, Entrepreneurial and Google-Owned.” He is now a billionaire investor at an implausibly young age.

“Boehler and Turner burrowed into a room in the basement of the West Wing and started calling people who grasped both the scale of the crisis but also the politics. Over that weekend, they put together recommendations and then circulated them with Birx and Fauci. The guidelines were refined further before being presented to Trump in the Oval Office. They wanted to recommend shutting down in-person education at schools. Closing indoor dining at restaurants and bars. Canceling travel.

“Birx and Fauci saw the guidelines as a crucial pause that would buy them some time to better understand the pandemic. Shutting down flights was not enough, they said; more would have to be done. … Boehler, Kushner, Birx, Fauci, and other aides presented Trump with the recommendations several days later, anxious over what he might say. Kushner had been preparing Trump for the possibility that they were going to need to take more ‘draconian’ actions.”

This account was not speculative. Kushner himself in his new book tells a very similar story:

“On my way to the White House early the next morning, March 12, my [billionaire investor] brother Josh called from New York City. He described the worrisome signs: the city had canceled its annual Saint Patrick’s Day parade, thousands of people were self-quarantining, and millions more were leaving the city. When I told him that I was asked to jump into the response, he made a suggestion: ‘You should call Adam.’”

Why not call, oh, for example, a public health scientist? Someone with some expertise in viruses? A medical doctor? Universities are packed with them. Someone, anyone, with actual knowledge and experience? Nope. It was entirely a crony operation, privileged fools about to take over the private lives of hundreds of millions of people.

Read More: Jared Kushner and the Mystery of the First US Lockdown