Official mortality figures for Europe show that there has been a shocking 691% increase in excess deaths among children since the European Medicines Agency extended the emergency use authorisation of the Pfizer Covid-19 vaccine for use in children aged 12 to 15 in May 2021.

Before this decision by the European Medicines Agency, deaths among children in 2021 were below the expected rate. But following the emergency use authorisation, excess deaths among children by the end of the year had risen by a deeply troubling 1,599% compared to the 2017 to 2020 average.

Unfortunately, this trend has continued into 2022, with Europe officially recording a 381% increase in excess deaths among children this year so far, compared to the 2018 to 2021 average. 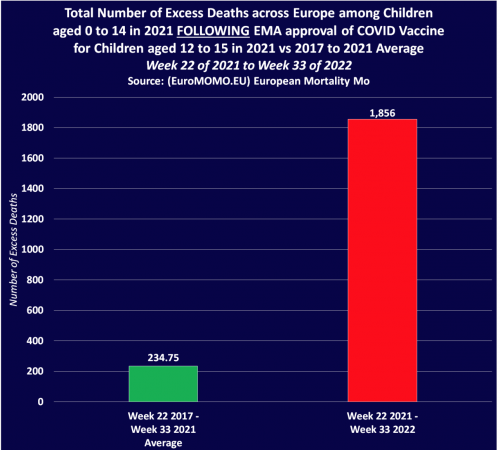 EuroMOMO is a European mortality monitoring activity. The organisation states that its aim is to “detect and measure excess deaths related to seasonal influenza, pandemics and other public health threats”.

Official national mortality statistics are provided weekly from the 29 European countries or subnational regions in the EuroMOMO collaborative network, supported by the European Centre for Disease Prevention and Control (ECDC) and the World Health Organization (WHO), and hosted by Statens Serum Institut, Denmark.