Ukrainian refugees and British hosts have hit out at the Homes for Ukraine scheme that has seen families on both sides feeling abandoned by the British government.

A British mother who opened her door to two Ukrainians says she feels ‘totally used and underappreciated’ and has vowed to ‘never again’ take part in the scheme.

Clara Maguire, 54, from Poole, Dorset, is one of a growing number of Britons who have quit the programme following a breakdown in relations with their displaced guests.

Others claim they have been ‘duped’ by ‘non-vulnerable’ Ukrainians, while many have yet to receive a penny of the monthly £350 payments promised by the government – some six months after Vladimir Putin’s tanks rolled over the border.

Meanwhile, Ludmila Zosym, 44, a mother from Kiev, has hit out at some of the claims, saying it is the British hosts who cannot understand what her people are going through, as they have never fled from war.

A trauma charity agreed as they called for more mental health training for hosts, and better access to services for refugees to avoid placing further strain on the NHS.

It comes as a quarter of British families taking part in the scheme are set to quit in the coming weeks, with the majority citing a lack of support amid the cost-of-living crisis sparked by soaring inflation and sky-high energy bills.

Hosts have also reported delays in receiving their monthly £350 grants, which are paid out by local councils – with pressure mounting on ministers to double the aid to £700.

One furious Brit in south London told MailOnline he has not received a penny, despite looking after refugees at his home since May.

Some claim they have spent thousands to care for their refugees while the Local Government Association, which represents 361 councils in England and Wales, said it only received the government grant money in June and was having to backdate payments.

Single mother Ms Maguire, who lost her husband just before the Covid pandemic, said she and her 13-year-old son ‘really struggled’ after housing a mother and daughter for six weeks, before asking the council to re-house them.

Branding the experience a ‘disaster’, the air stewardess, who recently took voluntary redundancy, told Mail Online she has still not received the £350 monthly grant, which is paid for each Ukrainian family taken in.

Ms Maguire told MailOnline: ‘We have never been made to feel so uncomfortable in our own homes as we did with them.’ 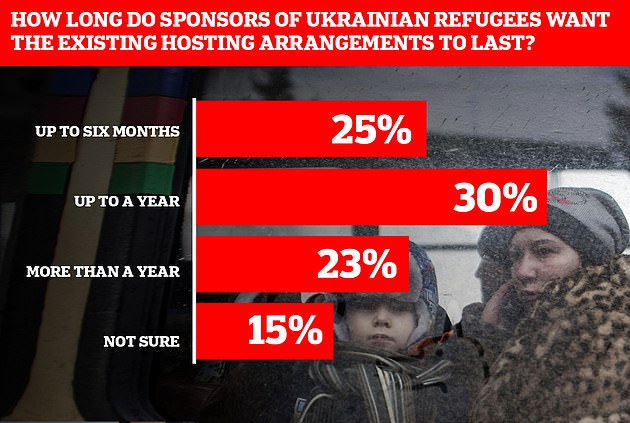 A quarter of British families taking part in the scheme are set to quit in the coming weeks, citing a lack of support amid the cost-of-living crisis sparked by soaring inflation and sky-high energy bills

She said the Ukrainian mother spoke fluent English and was earning around £700 per month from a French speaking job while earning a similar amount from child benefits.

Ms Maguire recalled how she cleared out two spare bedrooms and ‘took them everywhere’, be it to the dentist, doctors or the Polish supermarket, as they ‘would not eat UK food.’