A Texas police department refused to kotow to a woke mob after an officer posted a photograph of himself posing with Kyle Rittenhouse to the force’s Facebook page.

In the photo, Rittenhouse, who posed with an unidentified officer from the Thrall Police Department, could be seen grinning from ear to ear in front of a patrol vehicle.

‘Make those stops, you never know who you might meet,’ the post initially read. ‘Today it was Kyle Rittenhouse, welcome to Texas.’

Rittenhouse, 19, became notorious for his murder trial and subsequent acquittal after shooting three men, two fatally, in what he testified was self-defense during riots in Kenosha, Wisconsin, in August 2020, following the shooting of Jacob Blake.

‘I must have missed something, I believed that this young man was arrested, charged, indicted and then found not guilty by a jury of his peers. Is this not how our country works anymore? The hate in these comments is terrible, if you have information that is contrary to that I would honestly love to hear it,’ the post read. 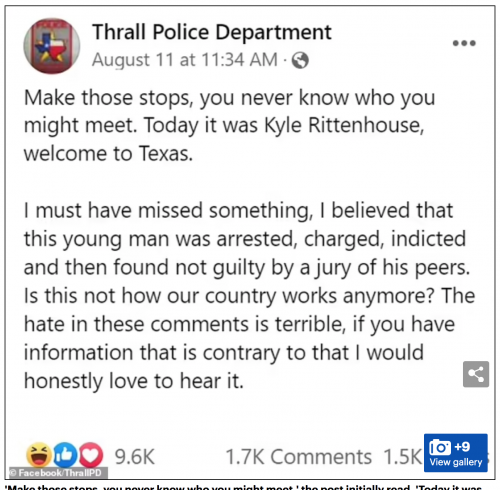 Read More: Texas police department refuses to apologize to woke mob who flew into rage after officer shared photo of himself with Kyle Rittenhouse