A teenage boy has died in the sea at Skegness hours after a 21-year-old man drowned in a Doncaster lake – bringing the UK’s heatwave death toll to 23.

Emergency services rushed to reports that ‘a child under 16’ was in the water at around 6.15pm on Saturday.

A search was carried out by police officers and the coastguard, before the boy’s body was tragically recovered at around 11.30pm last night.

It comes just hours after the body of a man was pulled from a lake in Doncaster yesterday evening.

An air ambulance landed as an urgent search was launched following reports a man had ‘got in to difficulty in the water’ in Lakeside, Doncaster, at around 4.10pm.

But South Yorkshire Police later confirmed a body had been recovered from the lake.

He has been named locally as Jay Walker, today described as a ‘sweetheart’ by heartbroken friends and family. 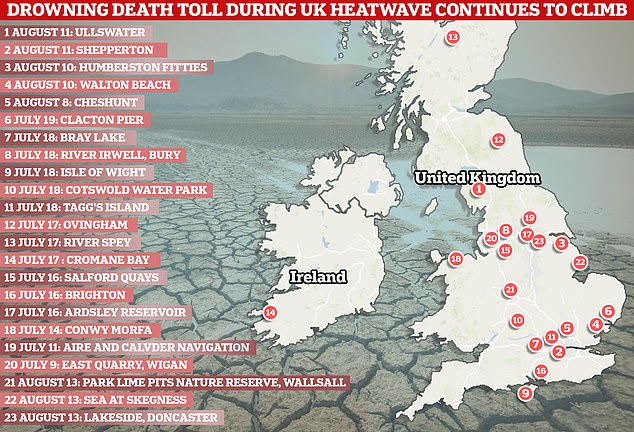 No further details have been given about the teenager at this time.

Superintendent Lee Pache, of Lincolnshire Police, said: ‘We received a high volume of calls for missing people on the coast yesterday.

‘At one point, within two hours, we received 10 calls.

‘All of those who were reported missing, other than the child who sadly died, were located safe and well. Our thoughts are with the boy’s family.’

Little over two hours earlier, Mr Walker got into trouble at a lake in Doncaster.

Witness Lynne Lawrence said she heard a police aeroplane circulating for half an hour, and later saw a helicopter had landed.

A spokesperson for South Yorkshire Police said: ‘We are very sorry to report that following earlier information about an incident at Lakeside, Doncaster, a body has now been found.

‘Emergency services responded to the lake at around 4.10pm, after receiving calls that a man, aged in the 20s, had got in to difficulty in the water.

‘No formal identification has yet taken place. The man’s family have been informed and are being supported by specialist officers.’

Tributes have now poured in for the young man from friends and family on social media.

Skye Marie Bowers posted: ‘To the world you may have been just somebody, but to all of us you were the world. God really does take the best people.’