US offshore oil drillers Shell, Chevron and Equinor halted operations at facilities pumping hundreds of thousands of barrels of oil per day on Thursday, citing an onshore pipeline leak that a port official said should take about a day to fix.

While the shut-ins are not expected to last more than a day or two, the number of facilities affected by the leak offered another example of how a relatively minor failure can affect a swath of U.S. energy infrastructure according to Reuters, which cited a person familiar who said that the shut-ins could halt about 600,000 barrels per day of oil production.

A flange connecting two pipelines onshore in Louisiana failed and caused about two barrels of oil to spill onto the ground, said Chett Chiasson, executive director of Greater Lafourche Port Commission. A fix is expected to take about a day, he added. 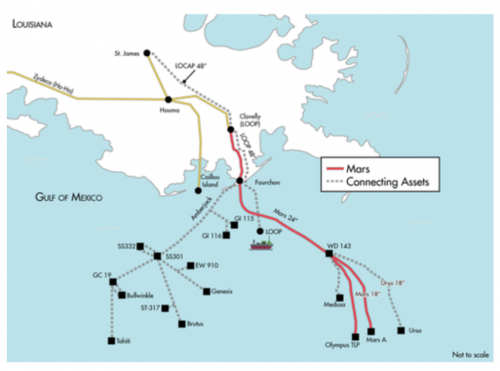 Shell’s Mars, Ursa, and Olympus platforms were shut because of the leak. The three are designed to produce up to 410,000 barrels of oil per day combined, according to data on the company’s website. Chevron’s Jack/St. Malo, Tahiti, and Big Foot oil facilities, which also connect to the Amberjack pipeline, have halted production. Equinor said it shut its Titan platform.

Pipeline operator Shell said it was premature to estimate the impact of the shut-in and declined to provide a timeline on when operations would resume. Murphy Oil, which also uses the Mars pipeline for some of its Gulf of Mexico operations, could not provide immediately comment on its operations, a spokesperson said.

Shell’s three platforms deliver Mars sour crude, a grade prized by oil refiners in the United States and Asia. Shell said it was evaluating “alternative flow paths” to move the oil to shore via other pipelines.