Buckley’s words reflect not only scepticism of ‘intellectuals’, but also a perception on his part that the views of Harvard faculty were not in line with his own. A recent survey by The Harvard Crimson (a student newspaper) suggests that if Buckley were alive today, he would not have changed his tune.

476 members of the Faculty of Arts and Sciences were asked how they would characterise their politically leanings. The distribution of responses is shown below: 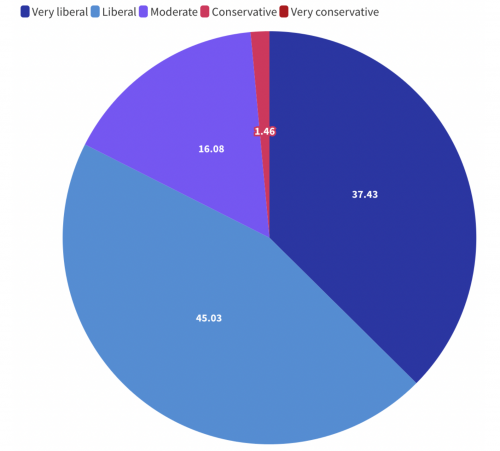 82% of respondents said “liberal” or “very liberal” (which in the US means “left-wing”). An additional 16% said “moderate”. Only 1.5% said “conservative”. And not a single respondent said “very conservative”. This means that conservative faculty at Harvard are outnumbered by roughly 55 to 1.

The Crimson survey is consistent with similar surveys from previous years, and with vast amounts of other data showing that academics in Britain and America lean substantially to the left.

Incidentally, the massive left-wing skew of Harvard faculty can’t be explained by those with left-wing views having higher intelligence. According to the General Social Survey, about 30% of Americans who score in the top 4% of IQ have conservative views. So if Harvard faculty were selected only on IQ, you’d expect about 30% to be conservative (and about 25% to be moderate).

Read More: Are There Any Conservatives Left at Harvard?