Taking its cue from the publication of the Met Office’s annual climate report for 2021, the BBC recently reported that sea levels were rising “much faster” than a century ago. Citizen journalist Paul Homewood did a little digging and came to a different conclusion, noting in the process that, in his view, it was an “improper…. misuse of statistics”. Rates of sea level rise in recent decades are similar to those seen between 1920 and 1960, he reported.

The Met Office notes that since the 1900s, sea levels have risen around the U.K. by between 12-21cms, and this compared with the 15-25cms likely range of global sea level rises. A reader of Homewood’s blog sought further details from the Met Office and was told that according to the “scientific consensus” contained in the IPCC Sixth Assessment Report, the average annual global sea level rise was 1.3mm between 1901 and 1971. This increased to 1.9mm between 1971 and 2006, and further increased to 3.7mm between 2006 and 2018. On the back of the figures as presented, it was claimed that human influence was “very likely the main driver of these increases since at least 1971”.

Homewood said that the Met Office was supplying figures – contained in the IPCC Summary for Policy Makers – that compared the period since 1971 with the period 1901-1971. He noted that this was the “worse sort of cherry picking”. As can be seen below, 1971 was at the end of a significant slow-down in sea level rise. 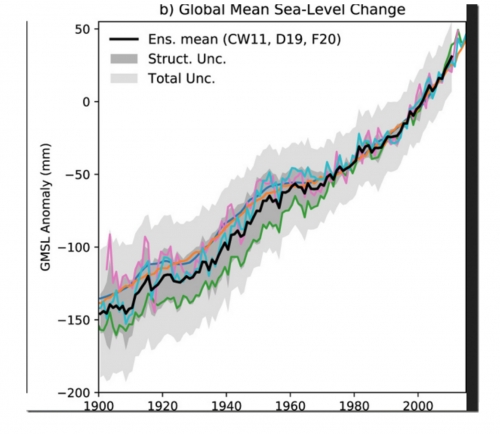