Earlier today, Noah Carl wrote about Spain’s Great Awokening, citing the work of David Rozado who looks at the increasing frequency with which particular words and phrases appear in the mainstream media, such as ‘transphobia’ and ‘white supremacy’, indicating an embrace of woke ideology. The same researcher has now collaborated with the political scientist Matthew Goodwin to look at the British media. Unsurprisingly, the results show it has succumbed to the same intellectual virus. Here is an extract from Matthew’s Substack newsletter outlining their findings.

Over the last 20 years, between 2000 and 2020, the British media has been utterly transformed. Just like America, our media has become utterly consumed by identity politics, discrimination, and is increasingly embracing social justice ideology.

The Great Awokening, in short, is now just as visible, if not more so, here in Britain.

As you can see below, over the last twenty years media references to words such as racism, racist, white supremacy, and xenophobia increased, on average, by 511%, while words such as sexism, misogyny, patriarchy, and gender discrimination rocketed by 172%. So too have terms such as transphobic and transphobia (up 4143%), Islamophobia and Islamophobic (up 306%), and anti-semitism (up 381%). 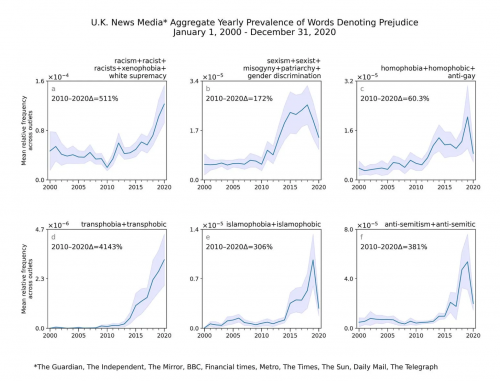 Read More: The Ideological Capture of the British Media