‘The Great Awokening’ is the term that’s caught on for describing the rapid adoption of woke ideology by journalists, academics, politicians, business leaders and other elites in the English-speaking world, beginning in around 2012.

As I’ve noted before, it can be seen in a variety of indicators: social attitudes among white ‘liberals’; the left-right tilt of the Democratic Party manifesto; the left-right position of Supreme Court Justices; speaker disinvitation attempts at universities; and Google searches.

But perhaps the most powerful evidence for the Great Awokening comes from word usage frequencies in major newspapers. As the researcher David Rozado (whom I’ve mentioned before in the Daily Sceptic) has shown, the frequency with which the New York Times and the Washington Post use various words denoting prejudice has skyrocketed in recent years. 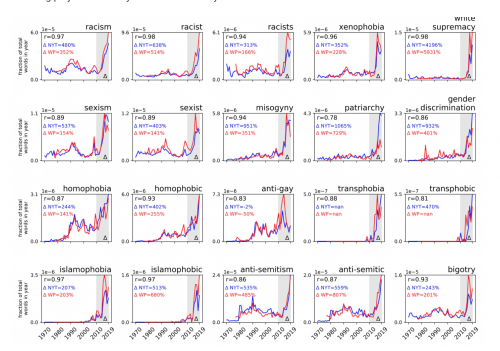 While nobody (except a Guardian columnist) could deny there has been rapid cultural shift in the Anglosphere, it is less clear whether non-English speaking countries have been affected. After all, we heard last year that various French politicians and intellectuals were resisting “certain social science theories entirely imported from the United States”, in the words of Emmanuel Macron.

Since then, however, Macron has done a U-turn, appointing a woke education minister who specialises in “U.S. History and minority issues”. So has the Great Awokening engulfed non-English speaking countries, or hasn’t it?