Europeans, and especially Germans, breathed a sigh of relief last Thursday when amid fears that Moscow would not restart flows along the Nord Stream 1 pipeline after its 10-day maintenance period, Putin turned the gas back on, if just to its pre-maintenance peak level of about 40% of maximum capacity. 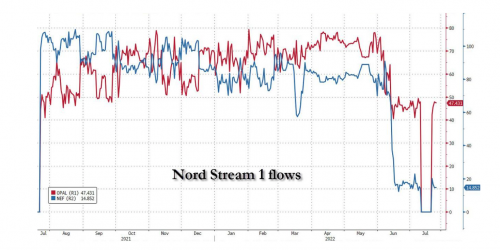 Alas Europe’s muted celebrations were not meant to last, and with many speculating that Russia was just waiting for the right opportunity to turn the screws on Germany, both literally and metaphorically, that’s precisely what happened moments ago when shortly after Siemens finally delivered transport documents for the controversial Nord Stream turbine that had been stuck in Canada for weeks, Gazprom unexpectedly announced it would halt one more Nord Stream turbine at its Portovaya compressor station from July 27, “taking into account the technical conditions of the engine,” the Russian company says in a statement.