Before this programme was screened on July 20th 2022, promotional material from the BBC and in newspaper articles such as this suggested it was going to be extremely biased and inaccurate. 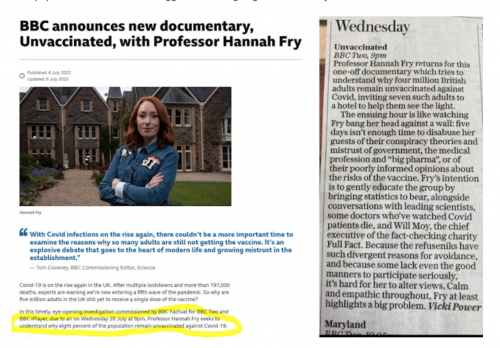 Based on this publicity material we already wrote articles first criticising the claim that only 8% of the U.K. adult population was unvaccinated and then highlighting the fact that the publicity material failed to reveal the blatant conflicts of interest of the key ‘experts’ used in the programme to convince the seven unvaccinated participants to get vaccinated.

Our pre-screening articles and tweets about the forthcoming programme were very widely read and one of the participants, Nazarin, contacted us to express her serious concerns about the way the programme was made – and how it might be edited – and to confirm that the participants were indeed not informed of the experts’ conflicts of interest (this is covered well in this article by threadsirish). Her subsequent tweets, such as the following, made clear her extreme concerns about the programme even before it was screened.

Read More: “Every Bit as Bad and Biased as Feared”: A Review of the BBC’s “Unvaccinated”