Corporate media claims climate change is causing more frequent and stronger hurricanes.  According to several studies this is untrue. In fact, a 2022 study reveals tropical cyclones in general – which include hurricanes, typhoons and tropical storms – are letting up and have declined by about 13% over the last 112 years, he wrote.

Despite the claims of activists and the corporate media that climate change is making major hurricanes – such as U.S. Hurricane Harvey in 2017 or Hurricane Katrina in 2005 – more frequent and stronger, several recent studies have found no evidence for either of these assertions.

In fact, a 2022 study reveals that tropical cyclones in general, which include hurricanes, typhoons and tropical storms, are letting up as the globe warms. Over the period from 1900 to 2012, the study authors found that the annual number of tropical cyclones declined by about 13% compared with the period between 1850 and 1900, when such powerful storms were actually on the rise.

This is illustrated in the figure below, showing the tropical cyclone trend calculated by the researchers, using a combination of actual sea-level observations and climate model experiments. The solid blue line is the annual number of tropical cyclones globally, and the red line is a five-year running mean. 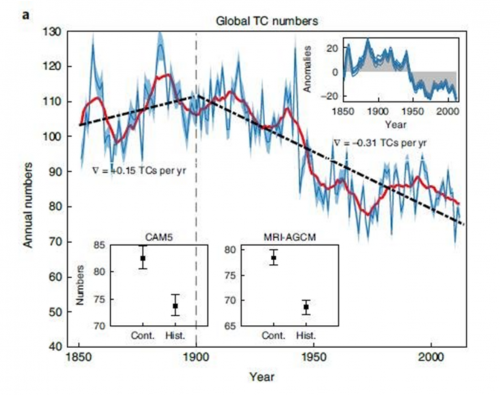 Read More: Over The Last Century Tropical Cyclones Have Decreased and Not Increased, As Corporate Media Claims