Gender activists within the field of archaeology are pushing for anthropologists to be prevented from identifying human remains as male or female because it is not known how ancients would have self-identified.

No, this isn’t the Babylon Bee.

Criminal forensic psychologists, archaeologists and anthropologists have long had the skills to identify whether a body is male or female based on a number of traits, including the size and shape of bones.

However, far-left activists are now insisting that this is transphobic because experts don’t know if ancient people identified as a specific gender.

“You might know the argument that the archaeologists who find your bones one day will assign you the same gender as you had at birth, so regardless of whether you transition, you can’t escape your assigned sex,” complained Emma Palladino, a Canadian Master’s degree candidate.

Palladino, who is studying for an advanced degree in archaeology, went on to assert that it was “bullshit” to assign gender to an ancient human.

“Labelling remains ‘male’ or ‘female’ is rarely the end goal of any excavation, anyway,” she wrote. “The ‘bioarchaeology of the individual’ is what we aim for, factoring in absolutely everything we discover about a person into a nuanced and open-ended biography of their life.” 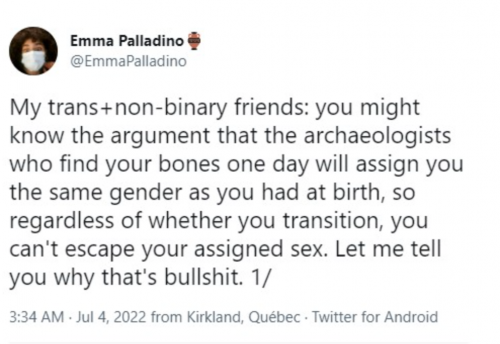