Big Tech’s crackdown on sceptical climate science continues with the recent news that Gregory Wrightstone, a geologist and the Executive Director of the CO2 Coalition, has been permanently excluded from LinkedIn, a social media platform owned by Microsoft. Wrightstone has had problems with the LinkedIn censors for some time, but he noted that his final demise occurred when he posted two charts used by the IPCC. The charts show the level of carbon dioxide in the atmosphere according to the paleoclimatic record. The data come from the U.S. National Oceanic and Atmospheric Administration (NOAA) and are widely considered the best available science. 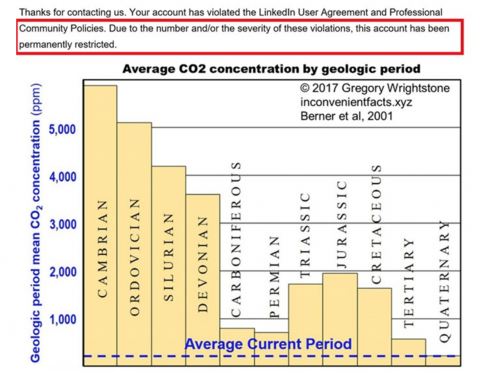 Of course the graphs above need careful handling in the politicised world of ‘settled’ climate science. They show that current amounts of CO2 in the atmosphere are at their lowest levels in Earth’s history. The level has been falling steadily for over 140 million years. And of course they fail to show a link with temperature, which has risen and fallen throughout the period without any obvious connection. Alternative explanations, some more plausible than others, suggest different forms of plants and life evolved to cope with higher CO2 levels, the sun was cooler in the past, and recent increases in the gas are unprecedented.

Read More: LinkedIn Bans Geologist for Posting the U.S. Government’s Own CO2 Graphs, Saying They Are “False” and “Not Allowed”