Two top-level American atmospheric scientists have dismissed the peer review system of current climate science literature as “a joke”. According to Emeritus Professors William Happer and Richard Lindzen, “it is pal review, not peer review”. The two men have had long distinguished careers in physics and atmospheric science. “Climate science is awash with manipulated data, which provides no reliable scientific evidence,” they state.

No reliable scientific evidence can be provided either by the Intergovernmental Panel on Climate Change (IPCC), they say, which is “government-controlled and only issues government dictated findings”. The two academics draw attention to an IPCC rule that states all summaries for policymakers are approved by governments. In their opinion, these summaries are “merely government opinions”. They refer to the recent comments on climate models by the atmospheric science professor John Christy from the University of Alabama, who says that, in his view, recent climate model predictions “fail miserably to predict reality”, making them “inappropriate” to use in predicting future climate changes.

The ’miserable failure’ is graphically displayed below. Since the observations cut-off, global temperatures have again paused. 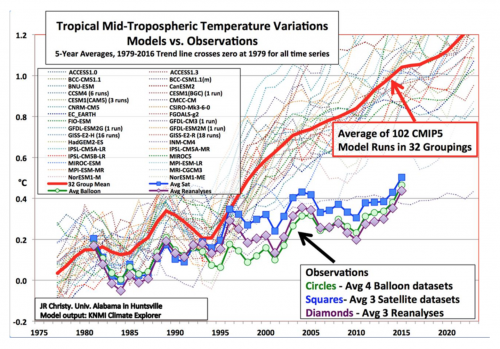