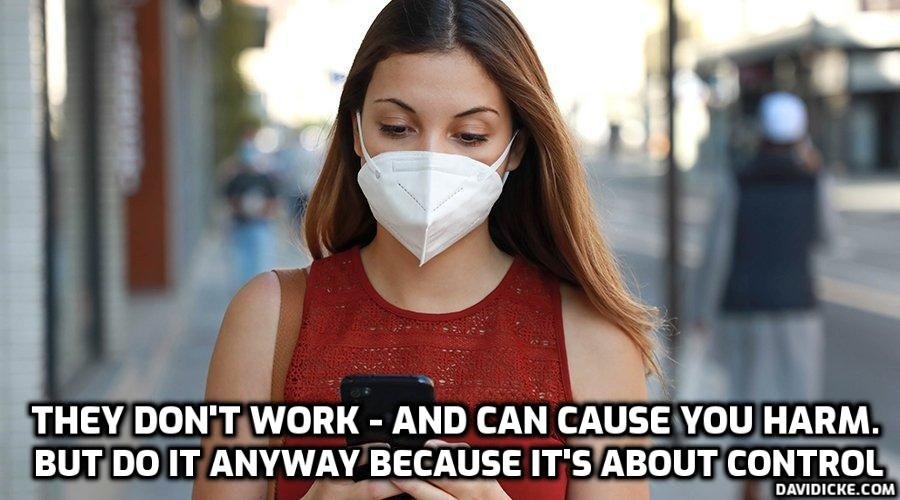 Much of the evidence cited in favour of facemasks comes from lab studies where researchers measure the amount of particles in the air after telling subjects to cough. A typical finding is that fewer particles are detected when subjects are told to cough whilst wearing a facemask.

So masks do work then? Not quite. Just because masks stop some particles doesn’t mean community masking has any meaningful impact on the spread of the virus. As the blogger eugyppius notes:

You need to inhale 5000 virus particles to have a good chance at infection. An infected cough releases 1 million virus particles. An effective and tightly fitted mask may stop enough droplets to keep all but 100k of those particles out of the air. Those numbers are hypothetical but you get the idea.

In other words, even if masks stop the vast majority of particles, they still let through many times more than would be sufficient for someone nearby to become infected.

So lab studies provide only very weak evidence to support community masking. What we really want are randomised controlled trials. A number of these had already been done for influenza, and they suggests that masks don’t do anything. Which is why health authorities initially advised against mask-wearing (before ‘The Science’ changed, and the urge to ‘do something’ kicked in).

Researchers did carry out a large RCT in Bangladesh, which was widely cited as evidence in favour of masking. Unfortunately, it wasn’t an RCT of masking per se – since the researchers didn’t hold everything else constant. So it shouldn’t cause us to update our beliefs much. After all, the lion’s share of RCT evidence still suggest that masks don’t work against respiratory viruses.

The problem with RCTs is that they’re expensive. This is particularly true in the case of masking because the hypothesised effect works at the community level, not the individual level. While masks may not protect the wearer, it is claimed that overall transmission will be lower if we all wear one.

The next best thing is a natural experiment. Which is exactly Neeraj Sood and colleagues analysed in their new study. (It’s a preprint, note, so hasn’t yet been peer-reviewed.)

The natural experiment took place in Fargo, North Dakota (the setting for the famous Coen brothers film), where two adjacent school districts adopted different policies on masking. At the start of the 2021–22 school year, Fargo Public Schools had a mask mandate in place, while neighbouring West Fargo Public Schools did not. The former then moved to a ‘mask optional’ policy on January 17th.