There were 1,540 more deaths than usual in England and Wales registered in the week ending June 24th, the most recent week for which data are available, according to the latest update from the Office for National Statistics (ONS), released on Tuesday. This is 16.6% above the five-year average. Of these deaths, 285 were registered ‘with Covid’ and 166 as due to Covid as underlying cause, leaving 1,374 from a different underlying cause.

This brings to 7,840 the total number of non-Covid excess deaths (above the five-year average) since April 29th, the start of the recent spike. Of these, a large proportion are occurring in the home, leading to calls for an urgent investigation into why thousands more people are dying than would be expected, despite Covid death numbers staying low. It is doubly concerning as following the 138,000 excess deaths since March 2020, a reduced number of deaths would now be expected due to the mortality displacement of people dying earlier than they ordinarily would. 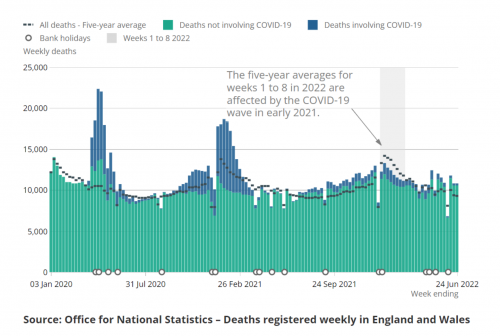 As I noted last week, the current spike in non-Covid deaths has broadly coincided with the spring rollout of boosters to over-75s, which began on March 21st. This pattern is depicted in the following two charts.

The first shows cumulative non-Covid excess deaths by date of registration since week ending March 25th (the dip in the week ending June 3rd is due to the bank holiday weekend). The rise in doses and deaths around the same time is obvious.

Read More: What’s Behind the Surge of Nearly 8,000 Excess Deaths Since April?